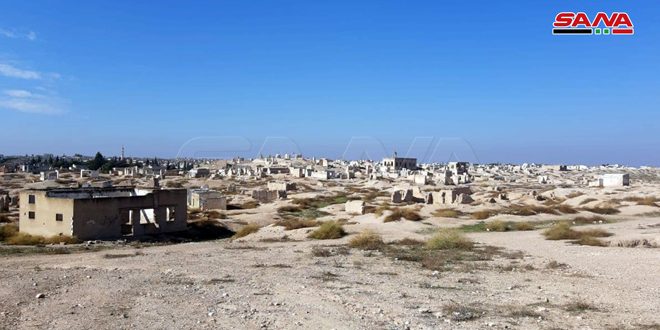 Homs, SANA- Activities of the Syrian Culture Days’ celebration has focused in Homs province on “Archeology and Dancing Theater”.

The celebration was kicked off on Monday at Dar al-Assad for Culture and Arts in Damascus, under the title “My culture is My identity”. Homs Cultural Department has organized within the celebration, in cooperation with Directorates of Antiquities and Museums and Tourism, a trip for a group of youth to the archeological Tell-el-Mishrifeh site in the Wadi il-Aswad in Homs countryside, to visit Qatna kingdom and get acquainted with its archeological discoveries.

Head of the children and youth section in Homs Cultural Directorate Siba Wassouf told SANA in a statement that 38 youths, aged between 12 to 14, took part in the trip which aims at getting acquainted with the Syrian history and culture far from the traditional teaching style.

Scientific observer of Qatna site Hikmat Awwad said Qatna occupies 1100 dunums and it dates back to the second millennium BC, which makes it one of the biggest bronze Age towns in central Syria. Awwad pointed out to the Syrian archaeological expedition’s discoveries in 1992,  which was formed to excavate the site, mainly the discovery of 90 percent of the 82-room Royal Palace and the administrative building which is attached to the palace, and dates back to 1600 BC and the royal cemeteries, which is considered an important discovery, in which about 2000 artifacts of pottery, marble, gold, precious stones and Egyptian granite were found, in addition to the discovery of a facilities for mining and pottery industry.

Tourist guide Luna Tannous pointed out to the importance of the trip in informing the youth on the history of Qatna kingdom, asserting that the youths have got acquainted with the defensive walls to protect The kingdom and the royal palace that includes the Holy Well and the Royal Cemetery . Meanwhile, Gabala dancing squad showcased its theatrical show which was performed by 33 dancers whose ages range between 6 and 23 years old.

Gabala dancing squad, which was founded in 2014, derived its name from the Phoenician name of the city of Gabla and has performed 5 dancing shows.

Archaeology celebration Dancing theatre Homs 2020-11-25
hala
Share
Previous An exhibition of Damascene Oud within the activities of the Syrian Culture Days
Next Russian Foreign Minister Sergey Lavrov in a joint press conference with his Iraqi counterpart, Fuad Hussein in Moscow: US intervention in Syria, Iraq and Libya has never brought anything positive to the region, but rather it led to the spread of destruction and devastation in these countries