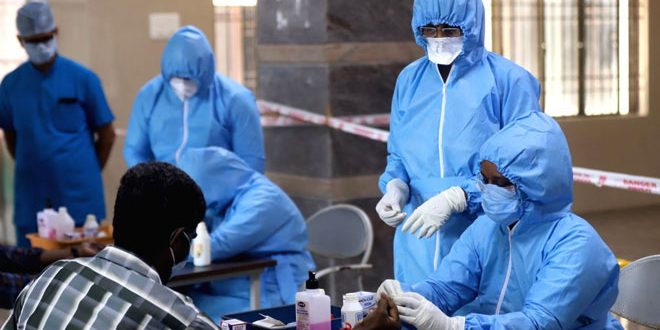 Capitals, SANA – 540,810 deaths from the novel Coronavirus (COVID-19) have been reported across the world since it appeared last December, according to new statistics which were posted on Tuesday by American Worldometer website.

The website, which is operated by an international team of developers and researchers, mentioned that 11,746826 confirmed cases were registered till now around the world, of which 540,810 cases have passed away while 6,741,583 have recovered.

In India, the total number of coronavirus deaths exceeded 20,000, while the number of infections increased shortly before reducing the measures of the general lockdown imposed two months ago amid gloomy economic expectations.

In turn, the Mexican Ministry of Health recorded 4902 confirmed new infections and 480 deaths, bringing the total number of cases in the country to 261,750 and the deaths to 31,119.

In China, the National Health Commission said that the Chinese mainland reported eight new cases which came from abroad yesterday.

The committee said that Liaoning Province, Shanghai Municipality and Sichuan Province recorded two cases, one case was recorded in Inner Mongolia and another one in Guangdong Province while no cases were reported in the capital, Beijing, and no deaths related to the disease were recorded among arrivals.

In Uzbekistan, the number of coronavirus infections exceeded 10,000, after 316 new cases were recorded in the past 24 hours.

In occupied Palestine, a seventy-year-old patients passed away, bringing the death toll to 22 cases.

In the same context, a lockdown was re-imposed on the city of Melbourne due to the surge in the number of the coronavirus cases as more than five million people received orders to stay at their homes in the second largest city in Australia, with a re-imposition of a partial lockdown following the high number of coronavirus infections.