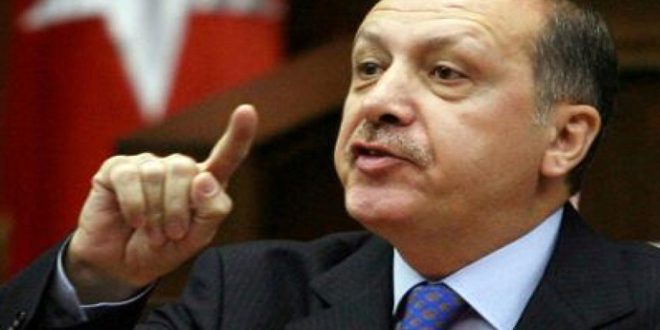 Ankara, SANA- The Turkish regime is continuing its acts of repression against the freedom of expression and media as it has launched a widespread arrest campaign and arbitrary measures that targeted journalists and media institutions which have been talking the losses inflicted upon it during its aggression on the Syrian and Libyan territories.

The Turkish Zaman Newspaper has revealed that the authorities of the Turkish regime have opened investigations with at least 25 journalists over the past week, and they banned access to a number of news websites and placed restrictions on social media.

Many arrest warrants have also been issued against many journalists following their revelations of information about the Turkish aggression against Idleb and the Turkish interventions in Libya.

In framework of that campaign, the Turkish authorities have arrested a number of journalists due to their publication of news on the killing of tens of the soldiers of the Turkish regime during the operations of the Syrian Arab Army against terrorist organizations in Idleb.

The Turkish regime has issued a decision to ban access to various social media sites because of the circulated news on this matter after the delay in the official announcement of the death toll.

Zaman Newspaper indicated that after covering news by three newspapers on the return of the body of the Turkish intelligence officer who had been killed on Libyan soil, the Turkish authorities decided to arrest journalists Murat Ağırel, Barış Pehlivan, Barış Terkoğlu, Ferhat Çelik and Aydın Keser.

That came despite of Erdogan’s admission last month of the death of a number of Turkish soldiers in Libya.

Vice-Chairman of the Republican People’s Party (CHP) and its Spokesperson Faik Öztrak affirmed that preventing the circulation of news is the most important major indicator of the suppression of the press, especially since the mentioned issue has become public after its disclosure in the Parliament.

Öztrak said that the recent measures are gaining momentum with time and it is unreasonable for the regime of a “democratic state” to suppress and prohibit and we tell them if they cannot manage the issues, they should leave.

Meanwhile, Ersoy Dede, a journalist for the pro-government Justice and Development Party (AKP) Star newspaper, revealed that the arrests of journalists will not be limited to the current detainees, and he said that the writer, Soner Yalçın at Oda TV will be also arrested.

Turkey has witnessed daily security operations which have targeted journalists since the government deviated from the constitutional and legal circles and the law in parallel with the emergence of large corruption and big bribery scandals in 2013 and the coup attempt in the year 2016.

The Council of Europe has called on the Turkish government to provide a detailed list and statistical information about the lawsuits filed in the context of freedom of expression as well as the sentences issued in this regard and to reconsider Article 301 of the Penal Code that urgently regulates freedom of expression in the light of international law standards.

The Committee of Ministers of the Council of Europe confirmed that prosecutors and judges in Turkey continue to apply the penal code without taking into consideration the principle of freedom of thought and expression.

With aim of covering losses of his aggression on Syria and Libya ... Erdogan's regime steps up its campaign against journalists 2020-03-10
ruaa-jazaeri
Share
Previous Syria, Cuba discuss means to enhance media cooperation
Next Kazakh FM: Holding new round of Astana talks on Syria might be delayed