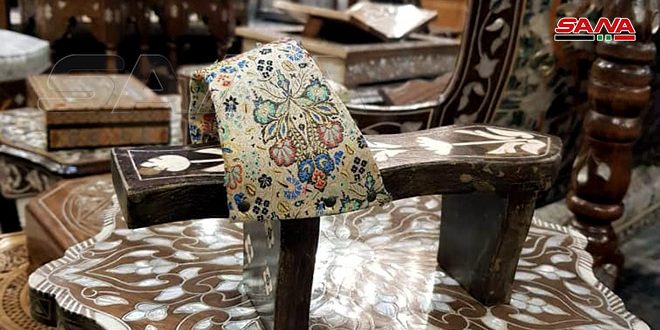 Damascus, SANA_ To arrive to Mahmoud Sayyala’s shop, the owner of a shop in al-Qabaqbiya Souk,adjacent to the Umayyad Mosque, is not difficult since he is one of the few who master the profession of clog making, for it has nearly died out. It is now sought only as a souvenir by tourists as part of the heritage of Damascus.

“Clog” (al-Qabqab)” is the foremost popular shoe in Damascus. For example, Ghawar el Tawasha, the most famous character in Syrian drama performed by prominent artist Duraid Lahham, wore the legendary Syrian clogs throughout a very famous drama series. In addition to the bright record of Syrian clogs in the Syrian collective memory such as folktales and popular proverbs.

Sayyala said to SANA that the craftsmen of Damascus are the most famous workers in the industry of clogs and their products were sold in a market known as “souk al-Qabaqip” which exported clogs to Egypt, Lebanon, Palestine and other areas.

He explained that the clogs were worn in the past decades mainly in Damascus, Lebanon, Egypt, Morocco and Tunisia in houses, bathrooms and mosques. Ladies wore the clogs with anklets in public baths on the occasion of a wedding. They are embroidered with garnet, stones and silver and gold threads.

Clogs are made of willow, walnut, poplar and sorghum due to how they are made and  are thought to be healthier than other footwear and so useful for foot allergies and people with diabetics, Sayyala added.

The craftsman pointed out that the children’s clogs are decorated with flowers and colors and all colors and decorations enter the brides’ clogs, where some still consider it a traditional wedding need.