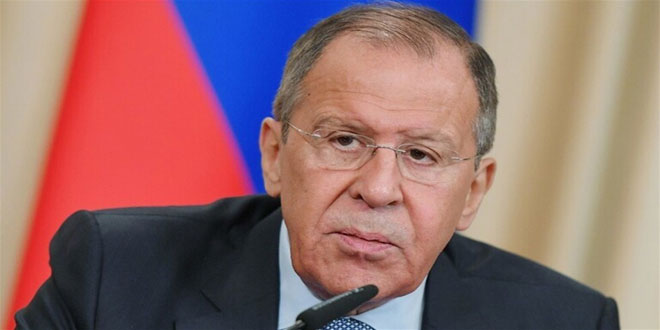 Yerevan, SANA_ Russian Foreign Minister Sergei Lavrov reiterated that the oil fields in Syria should be under the control of the Syrian state, pointing out that Washington’s attempts to control them are illegal and hinder the political settlement of the crisis in Syria.

“US attempts to control the oil fields in Syria are illegal and hinder the settlement of the crisis there and pose an additional serious threat.” Lavrov said during a press conference with his Armenian counterpart Zohrab Mnatsakanyan in Yerevan on Monday.

He pointed out that his country stresses the need for the Syrian state to extend its control over all its territory, including oil fields, as soon as possible, completely eliminate terrorism and to reach a solution to the crisis in Syria.

Washington is trying to complete its colonial role in Syria and the region, both politically and militarily, through its forces, which are engaged in robbery and looting of Syrian oil.This was confirmed by the Russian Defense Ministry recently, where it published pictures showing tank convoys transporting oil out of Syria under the guard of US military.