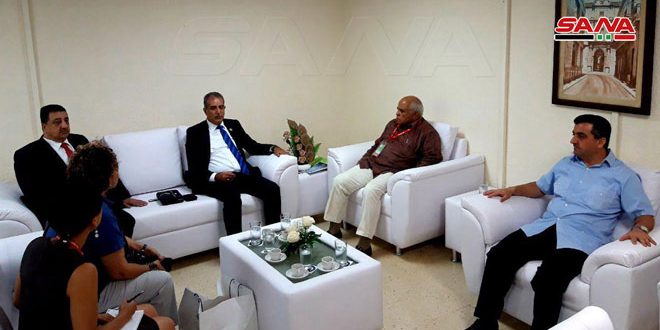 During his meeting with Syrian delegation, Chairman of Cuban Chamber of Commerce Orlando Hernandez Guillen expressed pleasure for Syria’s participation in this economic event, asserting that the Syrian participation in the Fair is an evidence on Syria’s recovery in the economic field following the war waged against it.

He pointed out that Syria’s participation contributes to expanding relations and trade exchange between the two countries, particularly that Syria and Cuba are connected with a deep-rooted and historic ties.

For his part, Syria’s ambassador to Cuba, Idris Mayya underlined that Syria’s participation in Havana International Fair reflects the two countries intention to enhance the economic relations and promote these relations to reach the level of the remarkable political ones, especially in light of the unfair siege imposed by the U.S. and other parties on the two countries.

In turn, Member and Secretary of Damascus Countryside Chamber of Commerce, Mohammad Khair Saryoul indicated that Syria participated in the Fair through exhibiting a number of national products, asserting that an agreement on exchanging products between the two countries, which aims at breaking the economic siege imposed by the U.S., was signed.