Venezuela supports Syria in its war on terrorism, condemns interference in its affairs 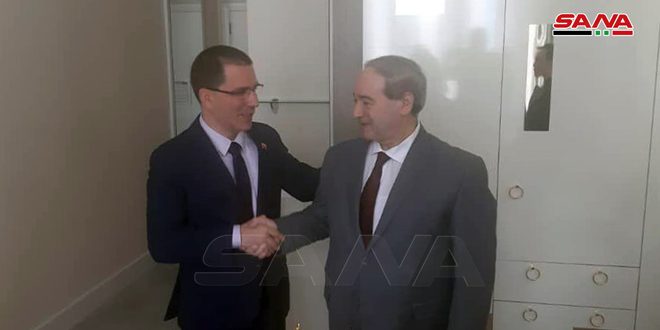 Baku, SANA_ Venezuela’s Foreign Minister Jorge Arreaza praised the achievements made by Syria under the leadership of President Bashar al-Assad.

Venezuelan Minister’s remarks came during his meeting with Deputy Foreign and Expatriates Minister Dr. Fayssal Mikdad, the head of Syria’s delegation to Non-Aligned Movement summit in  Baku on Thursday.

Arreaza appreciated Syria’s support to his country in confronting Western collusive schemes that target Venezuela and its legitimate leadership.

He voiced Venezuela’s full support to Syria in its fight against terrorism and its total condemnation of external interference in Syria’s internal affairs.

The Venezuelan diplomat  expressed his pride over the relations linking Syria and Venezuela.

Dr. Mikdad, in turn,  affirmed Syria’s support for Venezuela, its leadership and its people in confronting US and Western interventions aimed at undermining Venezuela’s sovereignty and independence and its independent political approach led by President Nicolas Maduro.

He explained in detail the recent achievements attained by Syrian Arab army through regaining control over large areas in northeastern Syria after liberating them from terrorist and separatist groups.

Both sides agreed to enhance coordination between the two friendly countries in the field of foreign policy, international organizations and issues of common interest.

Dr. Mikdad also met with President of the International Committee of the Red Cross (ICRC) Peter Maurer where they expressed satisfaction over the level of cooperation between Syria and the ICRC in providing humanitarian assistance to those in need in Syria.

The need to increase efforts to meet the increasing humanitarian challenges caused by the recent developments in the northeast region was also reviewed.

Maurer highly lauded the Syrian state’s cooperation with the Red Cross, especially with regard to al-Houl camp, including the special facilitations that enabled the Red Cross to provide humanitarian, medical and food aid there.

Dr. Mikdad, in turn, appreciated the efforts made by the International Red Cross, affirming Syria’s readiness to continue cooperation and provide more facilitations  to alleviate the difficulties resulting from the practices of armed terrorist groups and their sponsors, which was the main reason for the aggravation of human suffering in those areas.

supports Syria Venezuela 2019-10-25
m.eyon
Share
Previous One civilian martyred in blast of terrorists-planted mine in Sweida countryside
Next Warm welcome to Syrian army units in Hasaka with people throwing rice, rose at them