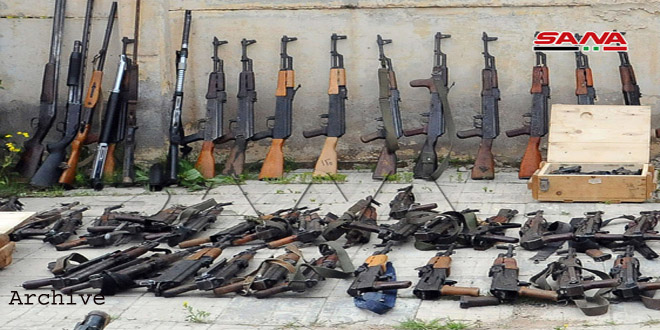 Daraa, SANA- The competent authorities in Daraa on Sunday found light and medium weapons left behind by terrorists between the towns of Khirbet Ghazala and al-Gharyia al-Sharqyia in Daraa northern countryside.

A source at the competent authorities told SANA reporter that in cooperation with the locals, a cache was seized in a basement in one of the houses in the area between the villages of Khirbet Ghazala and al-Gharyia and al-Sharqyia.

The source added that the cache contains a number of machineguns and automatic rifles, in addition to varied ammunition, telecommunication devices and mortar shells of different caliber left behind by terrorist organizations.