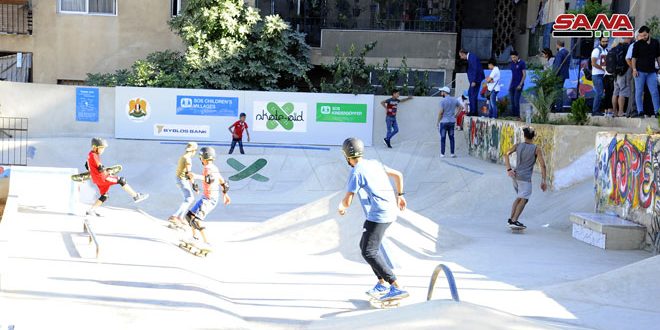 The skatepark extends over an area of two thousand square meters. It was established by the SOS Children’s Villages in Syria in cooperation with the International “Aid Skate” Organization. 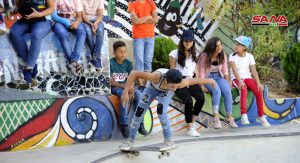 The land on which the project was carried out was presented by the Qudsayya Municipality which also planted the park and built a fence around it, according to Head of the Municipality Mohammad Dib Razmeh.

Razmeh added that the skatepark receives children daily for free from 09:00 a.m. till 10:00 p.m. under the supervision of a volunteer training team that will remain for three months to train the children on the proper playing methods.

SOS chairwoman Samar Daboul said that the “Skatepark” is the first of its kind in Syria and the site of the park was selected in Qudsayya because there is one of the SOS villages for children without adequate parental care and this would contribute to holding activities for them and integrating them with their peers from the locals of the city.

Daboul added that the SOS had designed the skatepark  and decorated its walls with paintings along with supervising the  process of training the children.

She added that the skatepark will be a starting point for other developmental projects after finishing the aid stage by the SOS form few months, hailing the facilitations and support provided by governmental bodies for carrying out civil projects. 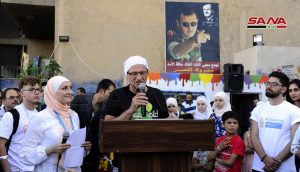 Founder of “Skate Aid” Organization Titus Dittmann said that the organization was established in the year 2009 in Germany and it is specialized in building skateparks all over the world. It supports some states through building parks in them for free.

Dittmann added that Qudsayya Park is the first of its kind which the organization participated in its establishment outside the SOS Children Villages, and this is a significant step for integrating the SOS children with their peers.

“It is fantastic to see those little spending happy times playing which helps them overcome the difficult times in their life,” Dittmann said. 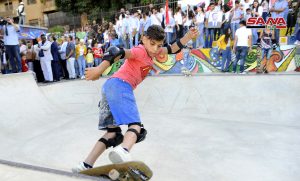 Chairwoman of the Social Services Department at the Ministry of Labor and Social Affairs Misa Midani underlined the importance of the civil work and its partnership with the governmental institutions for finding child- friendly spaces that would meet various needs of children.

Meanwhile, a  number of children expressed happiness for playing at the skatepark, particularly as the experience of skating is new and exciting for them.

The SOS Children Villages is a non-governmental society which  was established in Syria in 1975. is committed to help orphans and destitute who had lost their homes, their security and their families because of different circumstances.