Palmyra power plant put back into service after six-year hiatus 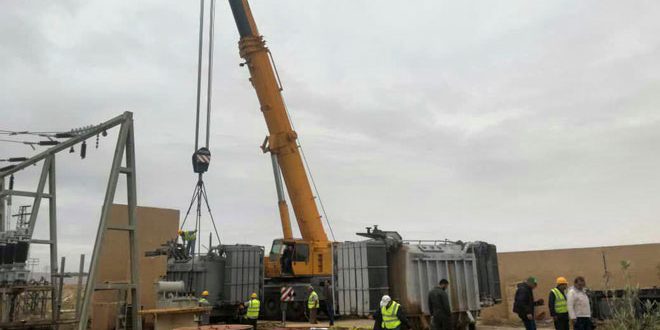 Damascus, SANA-The maintenance workshops affiliated to the Electricity Ministry were able to  repair and rehabilitate Palmyra power plant after six-year hiatus as it has been put into service again, according to  Director of Electricity Transmission General Establishment Fawwaz al-Zaher.

Al-Zaher indicated that the plant consists of two power convertors with a capacity of 20 MVA which were replaced and all the damages inflicted upon the plant by terrorists were repaired.

The plant whose capacity was 40 MW went out of service in the year 2013 after it has been completely destroyed along with the 70km-long high-voltage line 66 KV  which feeds the plant.

Electricity workshops have provided an alternative electrical feed partially to Palmyra immediately after liberating it from terrorism and they are continuing the work of rehabilitating the outputs of the KV 20 and the low-voltage networks to bring back electricity to all the city.

2019-06-13
ruaa-jazaeri
Share
Previous Huge amounts of C4, explosive devices left by terrorists found in Damascus Countryside
Next Bassil: Solving crisis in Syria will be according will of the Syrians themselves