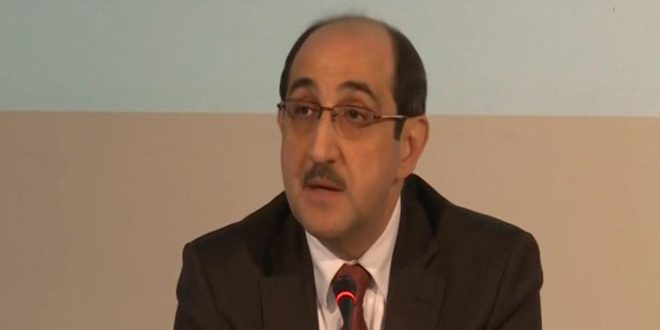 The Hague, SANA – Syria’s Permanent Representative to the Organization for the Prohibition of Chemical Weapons (OPCW) Bassam al-Sabbagh said that legally speaking, there is a big question mark on the compliance of the activities conducted by the mission sent to investigate the Douma incident with the rules of the Chemical Weapons Convention.

During a press conference on Monday at the Hague, al-Sabbagh said that the mission’s report is clearly politicized in that it levels accusations at the Syrian government while ignoring the White Helmets and Jabhat al-Nusra terrorist organization.

“The mission has applied double standard policy and this was very clear regarding the witnesses’ testimonies between those who were inquired inside Syria and the others who were inquired outside the country… the witnesses who were investigated in Syria and seen on the related videos were seven out of 15, in the other side, 26 persons were investigated from outside Syria and we don’t know anything about their relation to the incident and their testimonies were conflicting,” Sabbagh said.

He added that the report neutrality and objectivity was totally absent and the mission has used different interpretations of the toxic substances, sometimes, they considered their existence as an evidence on the use of chemical weapons, while, in other times, they didn’t consider that.

Sabbagh affirmed that Syria had cooperated with the mission as it had hoped that by facilitating its work, it would come up with an objective result, not with the opinions expressed certain countries.

He said Syria has fulfilled its commitment as per the Convention, and it will continue to cooperate with the OPCW.

In turn, Russia’s Permanent Representative at the OPCW Alexander Shulgin said that “Western partners” are creating fabricated theories about the use of chemical weapons.

He affirmed that Syria and Russia have offered all necessary facilities to the mission to carry out its work in a perfect way, adding ” the western accusations of obstructing the investigation track were incorrect.

Shulgin said that the OPCW committee’s investigation regarding Douma has not been transparent.