Khamis inspects work in Radio and Television Center in Aleppo 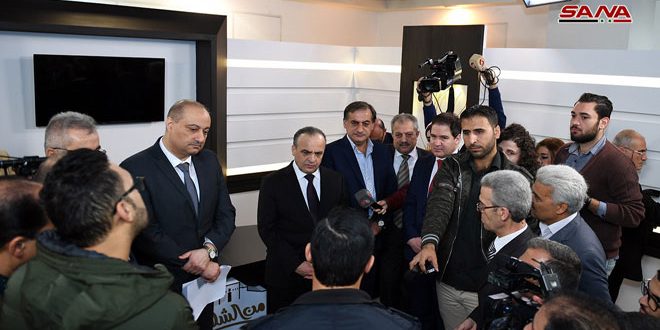 Aleppo, SANA- Prime Minister Imad khamis , accompanied by a number of Ministries on Monday visited a Radio and Television Center in Aleppo, and a radio headquarter inspecting work in and the media cadres’ demands regarding training courses, providing the cadres with equipment , and raising value of compensation to journalists. 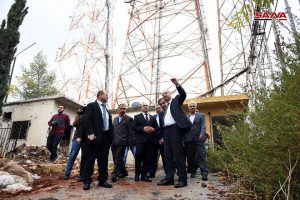 Khamis also visited the radio and television broadcasting station, inspecting the damage caused to the building due to the terrorists’ attacks.

For his part, Information Minister Imad Sara told the journalists that the delegation government’s visit is carrying several messages , the most important of which are that the government is determined to restore the economic and industrial sector in Aleppo , affirming that there a will of the Syrian state to rebuild what has been destroyed by terrorism.

The Premier also headed a meeting of Aleppo’s University Council, discussing an intended development strategy for the university.

Khamis inspected the restoration works which are being made to Aleppo Umayyad Mosque at Old Aleppo.

He inspected the restoration works at the Armenian Church of Forty Martyrs.

ِaleppo Radio and Television Center the Armenian Church of Forty Martyrs. 2018-11-05
admin
Share
Previous US-led coalition targets Deir Ezzor countryside with internationally –banned bombs
Next Al-Jaafari during UNSC session: The discovery of more mass graves in Raqqa city has brought the number of the dead bodies discovered to 4000 as a result of the Int’l Coalition’s bombs