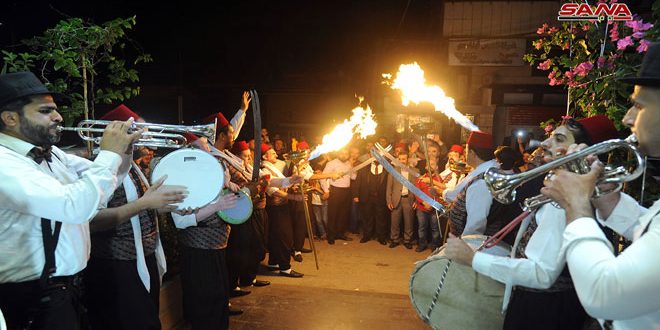 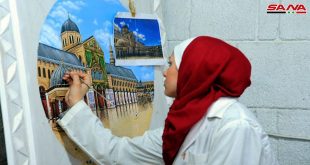 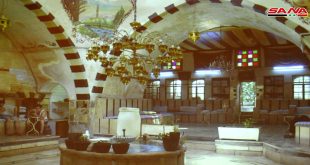 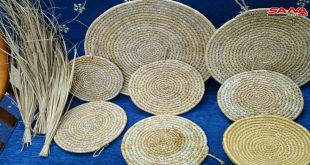 Damascus, SANA –  The Damascene Arada is a traditional Syrian folk dance and an ancient ritual that is kept alive in the neighborhoods of the Old City of Damascus and it is widely performed during festive celebrations, family ceremonies and other national and cultural events. 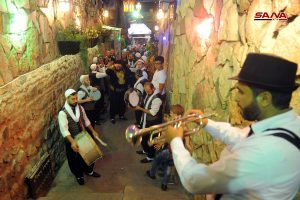 The Arada took root hundreds of years ago and has become a significant part of Syria’s folklore and cultural heritage, Abu Hussein who leads “Fursan al-Mahabeh” Arada band said in statement to SANA reporter.

He added that the band might include up to 50 members who are dressed in elaborately embroidered vests, white cotton shirts and loose dark trousers, indicating that they also wear skullcaps on their heads and a special leather belt sewn specifically for the costume, and some of them carry swords and shields. 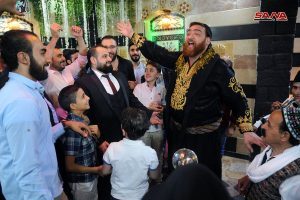 Abu Hussein went on to say that he leads the performance with his powerful voice, calling out in a song- and response routine while the rest of the band are singing, clapping, and playing the tabla, or Arabic hand drum, in rhythm, noting that the climax of the performance comes at the end as two band members twirl their swords in the air before engaging in ceremonial swordplay.

” Traditionally, the Arada band would be waiting at the door of hammam al-Souq to greet the groom and escort him to his family home then to the wedding hall amid cheerful songs and drum beats,” noted Abu Hussein.

The term ‘arada’ is derived from the Arabic verb a’rd which means ‘to show’ or ‘to parade’. Its idea is to demonstrate the hospitality and joy of a special event and show off men’s power and strength.