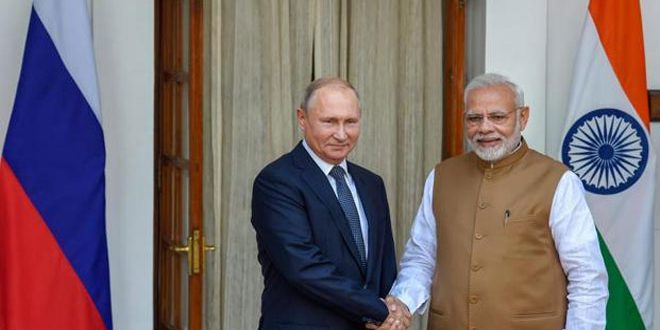 New Delhi, SANA_ Russia and India have renewed the need to solve the crisis in Syria through dialogue between the Syrians without foreign interference.

In a joint statement following the talks between Russian President Vladimir Putin and Indian Prime Minister Narendra Modi in New Delhi on Friday, the two countries renewed their support for the Geneva talks and Astana meetings, noting the complementarity of the two tracks to solve the crisis in Syria.

In their statement, the two sides called for restoring security and stability in Syria, supporting the Syrian-Syrian dialogue without any preconditions or outside interference and for continuing efforts to provide assistance to the Syrian people and facilitate the return of the displaced as a result of terrorism to their country.

On Thursday, the Russian President began a two-day official visit to India.