Al-Jaafari: Tenth round of Astana talks fruitful… Syria would restore Idelb through military operation if this was not available through reconciliations 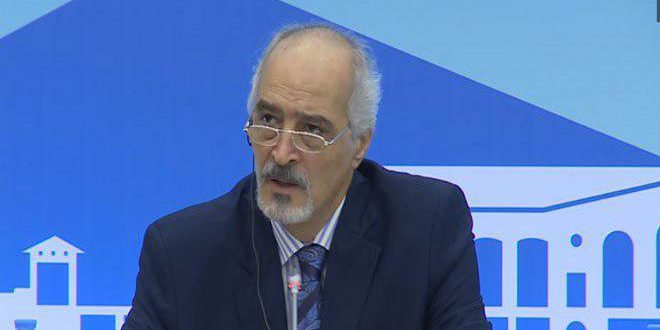 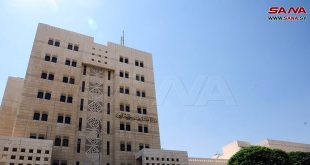 Sochi, SANA – Head of Syrian Arab Republic delegation to the tenth round of Astana meeting in Sochi, Dr. Bashar al-Jaafari, stressed that this round of talks has been fruitful and yielded significant results, particularly the discussion of the displaced Syrians’ return to their homeland.

In a press conference at the conclusion of today’s round of talks, al-Jaafari said that the main obstacle before the return of Syrian refugees to their home is the unilateral coercive measures imposed on Syria by the US and the EU, renewing Syria’s request for these measures must be lifted immediately.

Al-Jaafari noted that Syria encourages local reconciliation processes, indicating that these processes do not include terrorist organizations listed by of the UN Security Council as terrorist entities.

He added that the Syrian army has the right to retake control over Idleb through military operation if the reconciliations failed to do so.

The Syrian diplomat pointed out that the Turkish authorities have failed to respect thier obligations regarding the de-escalation zone in Idleb as provided by Astana statement as they sent military forces equipped with heavy weapons, occupied Afrin and expelled its inhabitants, adding that the presence of Jabhat al-Nusra terrorist organization in Idleb puts to the test the credibility of the Turkish regime in terms of implementing Astana statement and international resolutions.

He referred to Turkey’s transgressions which violate international laws such as the replacement of Syrian identity cards by Turkish ones in the areas it occupied, repeated the acts perpetrated by the Israeli occupation forces against people in the occupied Syrian Golan and established an industrial city in Jarablus city which reveals its hypocrisy regarding its claims of commitment to Syria’s sovereignty during Astana meetings and doing exactly the opposite.

Al-Jaafari said that Israel’s violations in the southern Syrian regions are no different from Turkey’s transgressions in northern Syria, stressing that there is firm evidence on the Israeli entity and western states’ sponsorship of terrorist groups since they facilitated the smuggling of “White Helmets” terrorists through the Israeli-held territory to Jordan then to the West.

He pointed out that as it happened regarding the scandal of “Israel’s  protection of terrorism and smuggling terrorists to Europe, the terrorists who attacked Sweida and committed a massacre in it came from al-Tanf area, where US forces are illegally deployed, demanding the United States and its allies to withdraw from Syria because their presence is illegitimate.

Al-Jaafari stressed that the Syrian Arab army will continue its military operations till full eradication of terrorism following its decisive military advance in the southern area, noting that there is no compromise when it comes to restoration of control over all Syrian territories and Syria will not tolerate the presence of any aggressor forces on its lands and will liberate all its occupied territories. 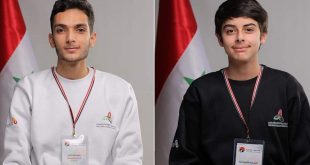