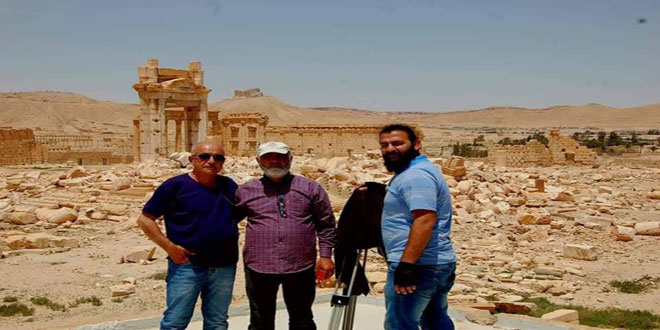 The documentary is a biography which tells the life and martyrdom of the former archaeologist of (Palmyra) Tadmur, Khaled al-Assaad, who was executed in public by Daesh terrorist organization (ISIS) on July 18, 2015.

The film documents al-Asaad’s achievements in the field of archaeology, research and excavation, and includes testimonies of people who met with him, including Dr Ali al-Qaym and Dr Mahmoud Hammoud, Director General for Antiquities and Museums, in addition to interviews with his family.

The film narrates his abduction, imprisonment, and beheading in the courtyard of the National Museum in Palmyra by ISIS who tried to extract information about the whereabouts of hidden treasures of Palmyra. Refusing to succumb, he was beheaded by the terrorist organization.

One of his achievements was Tadmour’s Development Project from 1962 to 1966, where most of the (al-Tawil) long road, al-Salbeh (Solid) square, some tombs, and the Byzantine cemetery were discovered in the Palmyra Museum.