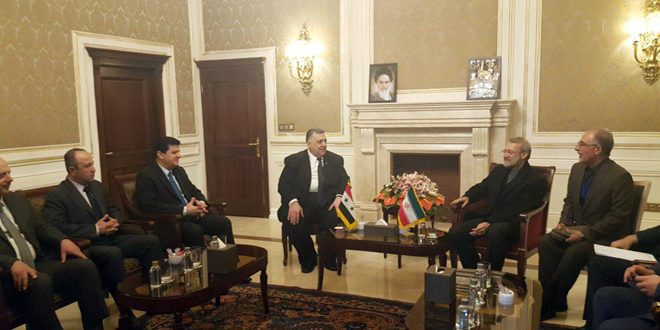 The meeting, which was held in Tehran, highlighted the need to continue consultations in various fields until the elimination of terrorism and its pawns in Syria and the region.

The Iranian leadership, government, and people will continue to support the Syrian people in various fields in order to strengthen their steadfastness and alleviate their suffering as a result of the unjust war imposed on them, Larijani affirmed.

In a press statement following the meeting, Sabbagh said that Syria’s participation in the 13th session of Union of Councils of Member States of Organization of Islamic Cooperation (OIC) Conference comes after the unjust and arrogant decision of US President Donald Trump to recognize Al-Quds (Jerusalem) as the capital of the Israeli occupation entity.

In the same context, Sabbagh met Secretary of the Supreme National Security Council of Iran Ali Shamkhani and discussed with him the latest developments in Syria and the region and ways to continue improving bilateral relations.

Sabbagh pointed out that Syria is going ahead in the fight against terrorism till the restoration of security and stability to all Syrian territory, adding that local reconciliations, the success of the political process and the reconstruction of what was destroyed by the terrorist war are Syria’s top priorities.

He also affirmed that the US presence in Syria without the approval of the Syrian government is illegal and a flagrant violation of international law and the UN Charter.

For his part, Shamkhani 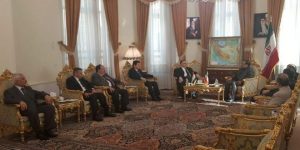 stressed the importance of pursuing the political process to resolve the crisis in Syria, pointing out to the great achievements and victories achieved by the Syrian Arab Army on the ground.

He asserted that failure will be the fate of any attempt to keep any part of the Syrian territory under the control of terrorist organizations or foreign forces, adding that no party can ignore or obstruct the fight against terrorists under the pretext of the de-escalation zones agreement.

He also hoped to develop Iranian-Syrian relations in various fields, especially in the commercial and economic sectors.