Update_Al-Moallem to Brazilian delegation: Conveying true image of what is going on in Syria to Brazilians 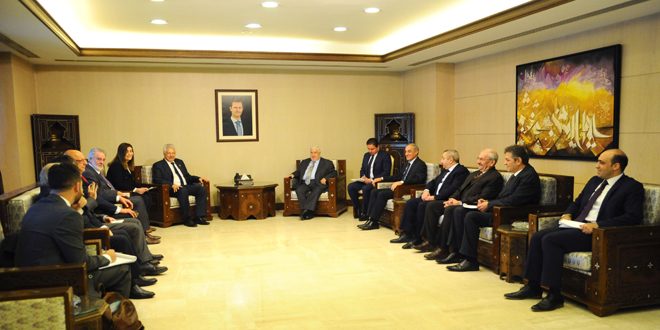 During a meeting with Brazilian parliamentary delegation, headed by  Arlindo Chinaglia, on Sunday, al-Moallem reviewed means of enhancing the standing relations of cooperation in all domains, particularly in the parliamentary field.

He called the visiting delegation to brief the Brazilian public opinion on the true image of what is going on in Syria of the crimes perpetrated by the terrorist organizations and groups backed by regional and international forces over the past seven years.

For his part, Chinaglia said that the visit aims at consolidating the political and parliamentary relations between the two friendly countries and getting acquainted with the true situation in Syria in light of the terrorist war being waged against it.

Members of the delegation said that consolidating the diplomatic relations between the two countries would promote cooperation at various official and popular levels, particularly during the upcoming stage which is witnessing the start of Syria’s recovery.

They hoped that Brazil will play active role in reconstruction stage in Syria.

In turn, Minister of State for National Reconciliation Affairs Ali Haidar said during a meeting with the delegation that the national reconciliation project is an expression of Syrians’ cultural identity which is more than 10,000 years old.

He added that the United States was the first country to attack and reject the reconciliation project and called for targeting it because it hinders its agenda of chaos and division. 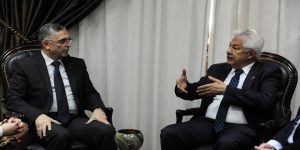 Haidar briefed the delegation on the local reconciliation project and its important role in paving the way for national dialogue, saying that Syrian government and people highly appreciate the positions of the BRICS countries, including Brazil, in supporting and contributing to the reconstruction project.

In the same context, Grand Mufti of the Republic Ahmad Badreddin Hassoun held a meeting with the Brazilian delegation, during which he affirmed that the terrorism targeting Syria poses a threat to the whole world, calling for working to prevent the spread of extremism among youths.