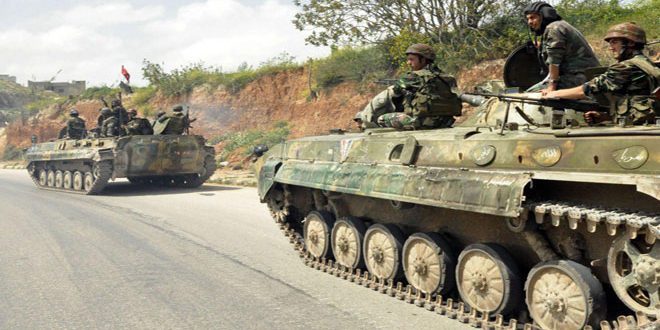 Provinces, SANA- Army units carried out special operations against gatherings of the ISIS terrorists on the southern outskirts of Deir Ezzor City.

SANA reporter in Deir Ezzor said that army units carried out intensive bombardments against gatherings and positions of the ISIS terrorists in al-Maqaber “cemeteries” area on the southern outskirts of the city.

The reporter added that a number of the ISIS gatherings and dens were destroyed in the bombardments and a number of terrorists were killed including one of their field commanders, terrorist Safwan Abdul-Wahhab Yasin.

Meanwhile, civil sources from the city of Mohassan in the eastern countryside of Deir Ezzor indicated that clashes erupted between the locals and the ISIS terrorists as a number of terrorists were killed and others were injured.

Later, a military source announced that Army and Armed Forces units reestablished control over a strategic point south of Dir Ezzor airport after eliminating the last gatherings of ISIS terrorists there.

The source told SANA that army units carried out special operations against ISIS terrorists’ gatherings and sites which resulted in reestablishing control over Faraj strategic point south of the airport.

A military source told SANA that army units and supporting forces operating in the northern countryside of Hama carried out during the past few hours concentrated operations against terrorists in the areas of Souran, Tibet al-Imam, Atshan, Tal Bazam, and Tal Skek.

The source said that the operations resulted in killing and injuring a number of terrorists and in destroying many of their vehicles.

In Homs, army units inflicted heavy losses in personnel and equipment on terrorists from ISIS and Jabhat al-Nusra in the northern and eastern countryside of the province.

A military source said that army units and supporting forces shelled ISIS bases south of al-Abtar mountain, Salam Gharbi, al-Sultaniye, and Oum al-Reesh around 70 km east of Homs city, destroying several of the bases, killing and injuring a number of terrorists, and destroying their weapons and ammo.

In the province’s northern countryside, the source said that army units carried out concentrated operations targeting Jabhat al-Nusra bases and gatherings in al-Ameriye, Tal Abu al-Sanasel, and al-Sa’an al-Aswad south of Talbiseh, which resulted in destroying bases and fortified positions, killing and injuring many terrorists, and destroying their weapons.