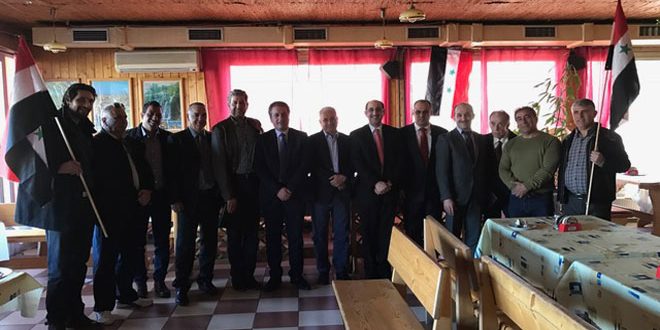 Bratislava, SANA – Syrian Ambassador in Vienna Bassam al-Sabbagh affirmed that Syria is being subjected to systematic terrorism where worst types of crimes are being committed and Syria’s infrastructure getting destroyed.

In an interposition he made on Tuesday at the Faculty of International Relations upon the invitation of the University of Economics in Bratislava, the Ambassador indicated that this terrorism aims mainly at fragmenting the region and undermining the structure of the state to serve the agendas of the enemies.

Al-Sabbagh said that terrorist organizations that are committing crimes in Syria receive support from regional and western countries, adding that the wrong European policies in the region in support of terrorism have contributed to the waves of displacement in the countries of the region.

He hoped that Slovakia would exert pressure on some Western countries that support terrorism. In turn, Ludmila Lipkova, the Dean of the International Relations Department of the University of Economics in Bratislava, pointed out in her speech to the situation in Syria and the crimes of the terrorist organizations in it, expressing her confidence in Syria’s ability to win against terrorism and stressing the Slovak people’s support for it.

During a meeting with a number of Syrian students studying in Slovakia and members of the Syrian community in the city, al-Sabbagh presented a review of the current situation in Syria and the local reconciliations taking place there.

“The current circumstances demand that everyone exert the utmost efforts in all fields to uncover the dimensions of this conspiratorial plan which Syria is subjected to each in his/her field of work,” he added.

For their part, the students expressed their solidarity with Syria and the Syrian Arab Army in confronting terrorism.