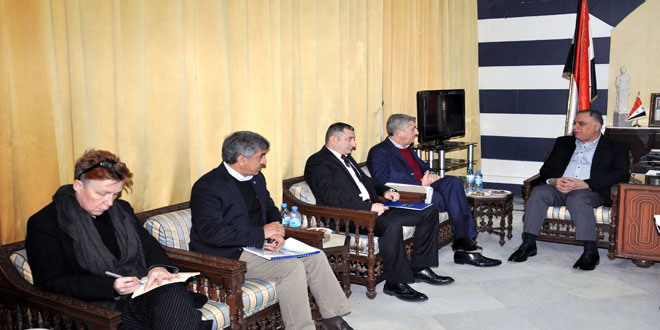 The Governor highlighted the efforts exerted by Homs Governorate in cooperation with the UN offices operating in Syria and the civil society to repair damaged and destroyed houses and markets, particularly the Old City and the archaeological commercial markets.

He also referred to the continuous efforts to ensure the success of local reconciliations in various areas of the province.

Al-Barazi said the Governorate is fully ready to implement the UN programs that have been agreed upon with the Syrian government which aim at delivering aid to all Syrians who need help and providing assistance to beneficiaries, affirming the continuation of efforts in Homs in order to speed up the return of all displaced people to the liberated neighborhoods and the rural areas and the return of agricultural
activity in the countryside of the province.

For his part, Grandi said the visit aims at evaluating the humanitarian situation in Homs province and inspect firsthand the situation of displaced families and ways to help them return to their homes by providing all forms of support in collaboration with the societal centers in the province.

Speaking to journalists, Grandi referred to the need for the return of peace and security to the Syrian people, saying that Syria deserves that everyone should to work to achieve that goal.