The army kills scores of terrorists in Hama northern countryside 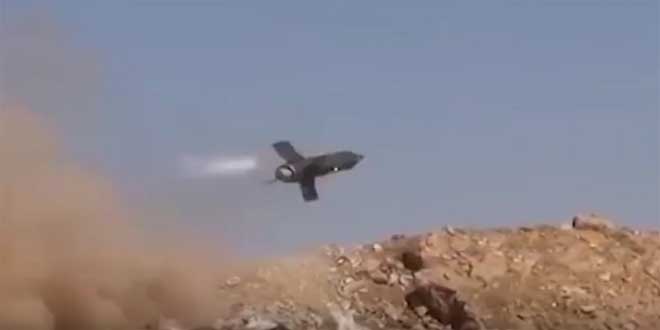 Provinces, SANA – The army operations have resulted in the destruction of heavy weaponry for terrorist organizations and the death of numbers of their members as the army units targeted their positions and sites in several areas.

A military source confirmed 50 terrorists were killed and more than 70 others injured belonging to “Jaish al-Fatah” during army’s operations in the northern countryside of Hama.

Units of the army, in cooperation with popular defense groups, confronted an attack by terrorist groups in the surroundings of Soran in Hama northern countryside, killing a number of them and destroying two tanks.

A unit of army sent concentrated strikes against terrorist gatherings to the west of Taibat al-Imam in Hama northern countryside, killing several of them.

The source said that army units engaged in heavy clashes with armed terrorist groups in the area surrounding al-Boida and Maarkaba towns in the northern countryside of Hama.

During the clashes,a number of tanks were destroyed in the area surrounding al-Boida town. 50 terrorists were killed and more than 70 others were injured.

Terrorist Mohamed al-Ashqar, leader of the so called “Jaish al-Izza” along with all his terrorist group’s members was identified among the killed.

The Syrian Air Force carried out airstrikes against ISIS dens and gatherings in the eastern countryside of Deir Ezzor province, according to military source.

A camp, a workshop for making explosive devices, and a weapons depot for ISIS were destroyed by the airstrikes in Hajin city to the east of Deir Ezzor city.

Later, SANA reporter said that an army unit directed concentrated strikes on two vehicles rigged with explosives while they were moving towards one of the military checkpoints in al-Moazafin neighborhood in the southern side of Deir Ezzor city, which led to destroying the two vehicles before they reached the checkpoint.

In the northern Idleb province, the Syrian Army Air Force targeted positions and movement axes of “Jaish al-Fatah” terrorists in the villages of al-Janoudiyeh, Armanaz and Binnesh in the western and northwestern countryside of Idleb province.

An army unit destroyed a command center, a fortified position and a monitoring center for the terrorist groups in Daraa al-Balad area in Daraa city, killing and injuring a number of terrorists in the process.