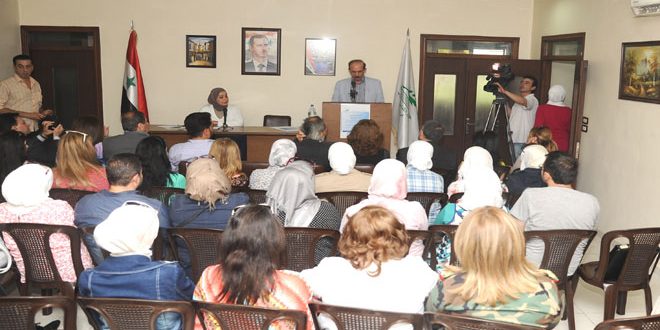 Damascus, SANA – A literary forum entitled “Women on the Wing of a Cloud” was organized by the Arab Writers’ Union branch in Damascus with the participation of several female writers of different experiences and backgrounds.

The forum sheds light on the women’s important cultural and social contributions.

Member of al-Baath Arab Socialist Party Regional Leadership, Khalaf al-Meftah, underlined the creativity in the way the female writers introduce their ideas, hoping that the participants would contribute to enriching literary heritage with their writings.

Al-Meftah highlighted the sacrifices of the Syrian people to defend their dignity and sovereignty in the current terrorist war waged against their country, stressing that Damascus is the most ancient city in the world and will ever remain the cradle of civilizations.

For his part, Chairman of the Arab Writers’ Union, Nidal al-Saleh said that this forum is just the beginning and there will be other literary forums in the future, noting that several Syrian female writers, like Ghada al-Samman, have achieved international recognition and fame.

Other participants underlined the importance of Syrian women and their standing by the Syrian Arab army, noting that the current war taking place in the country has shown the women’s vital role in building society.