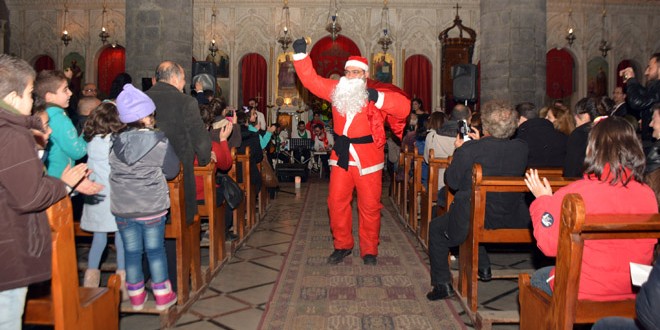 Damascus, SANA – The Syriac Orthodox Patriarchate of Antioch and All East organized a Christmas festivity titled “A Tale of Peace” on Friday evening at Lady of Dormition Cathedral in al-Zaitoun neighborhood in Damascus city. Father Gabriel Dawoord of St. George Cathedral in Damascus told SANA that the Patriarchate chose the title of the festivity because the message of Christmas is the message of peace which was brought by Jesus Christ to the world, and that this evening is a moment of peace, happiness, and love in a difficult time.

Member of the Syriac Youth Association Micheline al-Khori, the supervisor of the event, said “Syria’s wounds will heal, because it has sons that are patient, an army that defends righteousness and the land, and a wise leadership leading the people and standing at the forefront in the face of the nation’s enemies, and because the Lord of Peace Jesus chose it as its home, so he will never forget it and will not let it suffer more.”