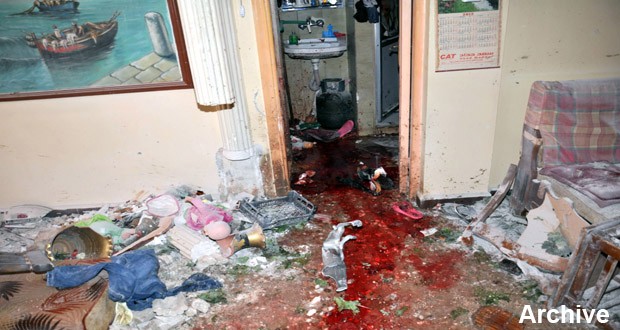 A military source told SANA that terrorists committed their crime at 7:00 am in synchronization of the army operations in the area, adding that the act aimed at accusing the Syrian Army and the Russian air force of targeting civilians.

“The Syrian Ministry of Defense stresses that the Syrian Army and the Russian air force do not target civilian-populated areas and holds Jabhat al-Nusra and its associates full responsibility for such crimes,” the source said.

The armed terrorist groups had perpetrated a number of crimes against civilians in several areas, the purpose of many of these acts were to accuse the Syrian Army of targeting civilians. Photos and videos footages of such acts have been used repeatedly to mislead local and international public opinions.

In November 2012, terrorists committed a massacre against two families in al-Marjeh in Aleppo city, misleading media outlets distributed the footages and photos and alleged the Syrian Army was the perpetrator.

In a relevant context, three civilians were injured due to a terrorist rocket attack in al-Arman neighborhood in Homs city.

The attack, the source said, left 3 civilians injured and caused material damage to the citizens’ properties and the infrastructure in the site.

Victims in a terrorist explosion of a car bomb in al-Tal, Damascus countryside

Terrorists detonated a car bomb in al-Tal city in Damascus countryside on Thursday, leaving a number of victims among the civilians.

Civil sources told SANA that terrorists blew up a car bomb behind the municipality building in al-Tal city, causing several victims and injuries among the civilians.

Meanwhile, a medical source at al-Mowasa hospital told SANA that two children and a man were received in the hospital, having different injuries due to the explosion.

Terrorists fired a mortar shell that fell in the surrounding of Umayyad main square in Damascus.

A police source told SANA that a mortar shell hit the fence of the Radio and TV building without leaving any causality.