Al-Zoubi: Eliminating terrorism prior to any political solution 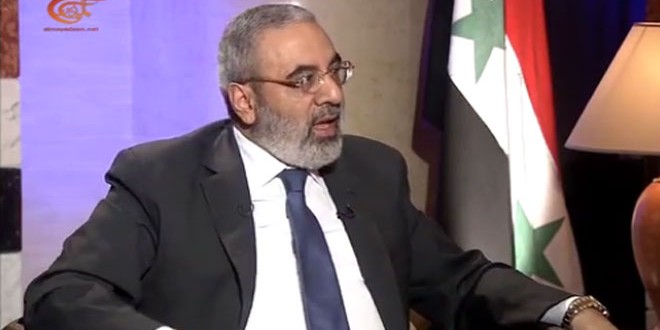 Damascus, SANA – Information Minister Omran al-Zoubi said the new achievements of the Syrian army brought more optimism in the country, highlighting that no political solution can solve the situation in the country before terrorism is eradicated.

In an interview with al-Mayadeen TV on Tuesday, al-Zoubi said the Russian participation in fighting terrorism conveyed a clear message that fragmenting, toppling or interfering in the Syrian state is not allowed.

He denied the presence of any Iranian troops on the Syrian soil, adding that the Iranian presence is of consultative nature and that the Syrian Army is the side which is fighting terrorism.

“The US was not honest in alleging it is fighting the ISIS, they only wanted to contain it”, al-Zoubi said, adding that at the time when the US alleged it was fighting the ISIS, multiple countries including Turkey, Saudi Arabia and Qatar were providing the ISIS with all kinds of weaponry and logistic support.

According to al-Zoubi, the western sorties have killed only 118 ISIS terrorists but the Russian air raids, which started only few days ago, have already inflicted heavy losses upon the terrorist organization.

The Minister stressed that the Kurds are part of the Syrian society, adding that they have been receiving military support from the Syrian Army since the beginning of the crisis and the emergence of the ISIS.

He warned that Turkey is heading towards major problems because of the divisions in the Turkish society, a division caused by Erdogan’s policies and his attempt to lead the country on the bases of party and personal interests, highlighting that the latest terrorist bombings in Ankara targeted crowds of people who were demonstrating against Erdogan’s policies and he actually benefitted from such acts.

Al-Zoubi said no political solution can solve the situation in the country before terrorism is eradicated, adding that the Syrian government approved the four committees initiative set by Staffan de Mistura and that it was known that the “opposition” will refuse it.