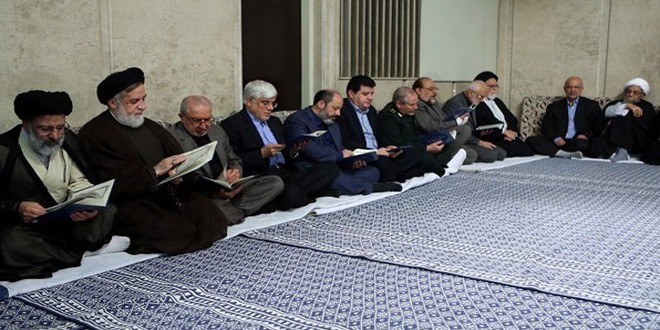 Tehran, SANA- The Islamic Republic of Iran held on Sunday a memorial service for the victims of a recent tragic stampede during the annual Hajj (Pilgrimage) in Saudi Arabia. The eservice was attended by Iran’s Supreme Leader Ali Khamenei, President Hassan Rouhani, senior officials, families of the victims and a crowd of Iranians.

As many as 465 pilgrims lost their lives in the incident that happened as they were taking part in one of the Hajj’s major rites.

Iran has the highest death toll among the countries affected by the tragedy.

Dr. Adnan Mahmoud, Syria’s ambassador in Tehran who attended the ceremony, conveyed the condolences and consolation of President Bashar al-Assad to Mr. Khamenei and the brotherly people of Iran over the Iranian pilgrims who lost their lives during the deadly incident.

In a statement during the ceremony, Ambassador Mahmoud stressed the need for the Islamic nation to bear responsibility for this painful tragedy and to hold those responsible for the incident accountable, pointing out that those who support terrorism and bloodshed of the Syrian people and the peoples in the region and commit crimes and destruction are the same.

Ambassador Mahmoud added that the Saudi regime is a main backer of terrorist groups in Syria which provides them with all forms of support in violation of all norms, laws, moral and human principles.

For his part, Khamenei expressed his thanks to President al-Assad for his condolences.