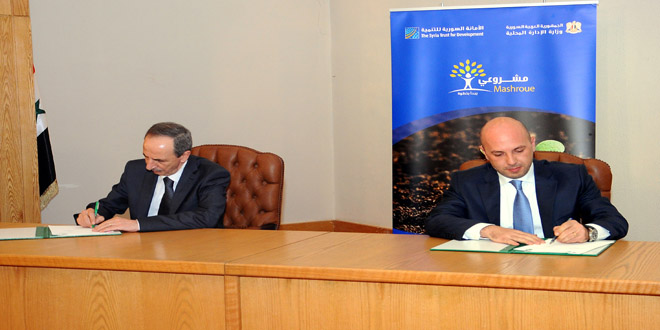 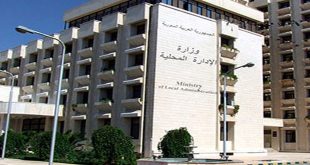 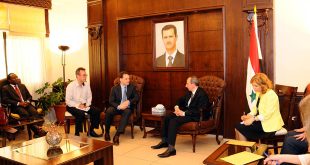 Ghalawanji: Government delivered aid to more than one million persons since beginning of 2016 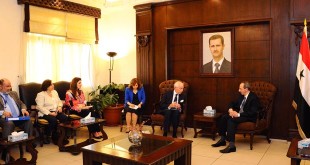 Damascus, SANA- The Local Administration ministry signed on Sunday with the Syria Trust for Development an agreement to develop and expand “Mashroue” means (My Project) program to reach around 63,000 beneficiaries through 1,500 funds in all provinces with an overall value SYP 5,2 billions.

In a press conference, following the signing, Deputy Prime Minister for Services Affairs, Local Administration Minister Omar Ghalwanji affirmed the importance of creative initiatives for latent energies of the community and make a positive interaction between the components to stand against the challenges posed by the crisis and overcome it.

Ghalwanji said that the program, which kicked off in 2011 via a generous initiative of Mr. President Bashar al-Assad through the Syrian Trust for Development and in cooperation with development offices in the ministry, had achieved success in all sectors and the most prominent project is financing small and micro-enterprises.

He pointed out that the priority for “My Project” now is for the poorest people, most affected and displaced ones who returned to their villages, after army restored security and safety to them, in addition to families of the martyrs, wounded, kidnapped and women, adding that a new stage of the program will begin which depends on participatory and allow new partners and funders to participate in carrying out small and micro-enterprises.

In turn, Secretary General of the Syrian Trust for Development Fares Kallas hailed the efforts of Local Administration Ministry and provinces in the success of the program and enhances communication with local communities.

“My Project” program kicked off in 2011 in five provinces through establishing 53 funds with an initial balance estimated at SYP 84 million to reach now 286 funds in 11 provinces with a balance of SYP 626 million and the total number of those who have benefited from the program loans reached 14,861 people with an overall value of loans amounted to SYP 848 million.

According to Ghalawanji and Kallas, the program relies on social accountability, with local society being the one who will monitor and supervise the program via locally-appointed committees.

They asserted that the loans provided by the loans do not require insurance, and that projects and programs that improve citizens’ living conditions is the best way to overcome the impact and repurcussions of the terrorist war imposed on Syria.

Kallas also noted that people with special needs are covered by this project and are entitled to specialized programs that cater to their needs and conditions, adding that the Trust, upon the directives of the Head of the Board of Trustees Mrs. Asmaa al-Assad, is providing loans free of interests.