Damascus, SANA-Tourism Minister Bishre Yazaji said on Thursday the international silence and deliberate ignorance of naming what is taking place in Syria with its real name and the shy denunciations are not enough, adding ” we have to stir the whole humanity up to take a genuine action that protects Palmyra ancient antiquities.”

“The international community should assume its responsibility to press the sides which fund and supply terrorists who perpetrate their crimes against our heritage and history, Minister Yazaji said in a statement to SANA.

The Minister sent a message to Secretary General of World Tourism Organization, saying that the world has to mobilize the most possible support to protect Palmyra.

He added that the destruction of this archaeological edifice would not be durable for all humanity and civilized world as the whole humanity will loss thousands of years of documented civilization.

The Minister hoped international organizations would invest their efforts to protect Palmyra ruins and prevent terrorists from continuing this ugly crime against the human civilization. 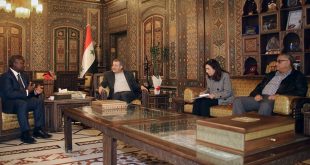