Minsk, SANA – Belarusian Economy Minister Vladimir Zinovsky expressed his satisfaction with the outcomes of the 6th session of the Joint Syrian-Belarusian Economic Cooperation Committee that was held few days ago.

The Committee’s final protocol, which focused on increasing cooperation between the two countries in trade and economy, was signed Thursday, and was described by Zinovsky as a “road map” for future joint projects.

Zinovsky referred in an interview with SANA reporter in Minsk, Belarus’s capital, to the protocol’s stress on joint cooperation in economic, industrial, technical, educational, medical and social services sectors.

The Committee’s session, he noted, discussed a number of projects in manufacturing Belarusian bulldozers in Syria and transferring electricity technologies to Damascus among a series of other promising projects.

A similar feeling of satisfaction was echoed by Syria’s Industry Minister Kamal Eddin Tu’meh in another interview given to SANA.

According to Tu’meh, cooperation between Syria and Belarus would contribute to overcoming the West’s sanctions imposed on both countries.

The Minister pointed out that the Belarusians were open to all issues that were on the Committee’s discussion table, noting that the final protocol included supplying Syria with engineering machinery, bulldozers and busses in a first stage.

Joint projects to assemble Belarusian automotive equipment in Syria have been planned to start later, in addition to cooperation in agriculture, education and pharmaceutical industry projects. 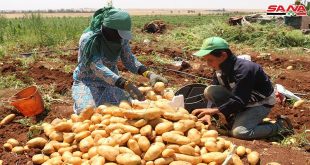