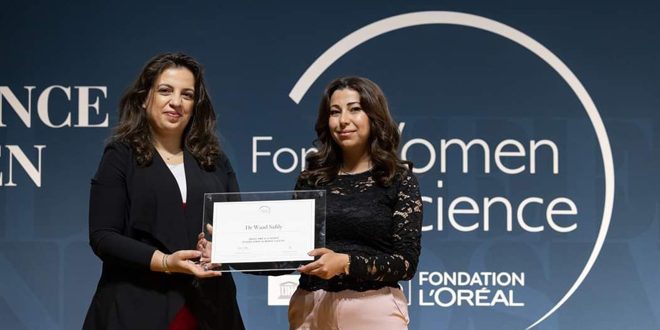 Homs, SANA- L’Oréal-UNESCO for Women in Science in France honored Dr. Waad Saftly from Al-Baath University with L’Oréal-UNESCO Awards for International Talents for her research entitled “Studying the evolution of galaxies throughout the history of the universe”. Saftali’s research won with 15 others worldwide for the year 2022 out of 260 PhD and post-doctoral researchers. She had previously obtained the L’Oréal for UNESCO award on the level of the Arab Mashreq for the year 2021.

Saftali told SANA that the honor is a great incentive and momentum to continue her scientific activity, expressing her happiness with this success which she considered a success for Syria with scientists and researchers in the world, as well as its contribution to raising the scientific classification of Al-Baath University globally.

She added that her research aims to better understand the physical processes that control the evolution of galaxies and establish new standards for the development of the next generation of cosmological numerical simulation models that are able to reproduce the observed properties of galaxies in the universe to a large extent.

Damascus,SANA-Artists Syndicate of Damascus mourned on Wednesday the death of the actress Antoinette Najib who …