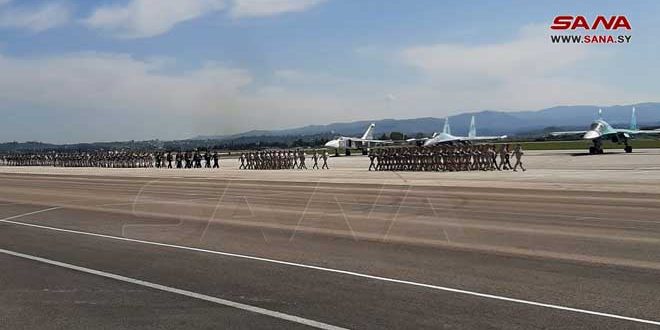 Lattakia, SANA- A central celebration was held on Monday at the Hmeimim base on the occasion of the 77th anniversary of the victory of the Russian people in their Great Patriotic War against Nazism. “We in Syria highly appreciate the history of great Russian people and recognize that the future of our peoples won’t be but as their history thanks to our solidarity and strong relations which increasingly consolidate on all levels,” Abbas said in a speech at the celebration.

Lieutenant-General Roman Berdnikov, Commander of the Russian forces working in Syria, for his part, said that soldiers and officers of the Russian forces are carrying out a battle against international terrorism that targets the Syrian Arab Republic in addition to their tasks they carry on in the special military operation in Ukraine.

The celebration included a military parade with the participation of Russian and Syrian units with a show for the two countries about the military equipment, weapons and planes.