Scenario of attracting terrorists to Syria repeated in Ukraine 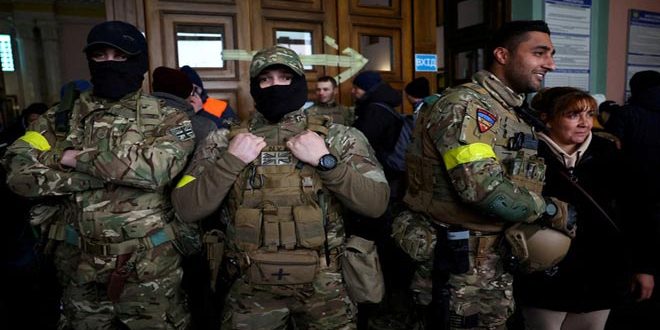 Damascus, SANA- Despite warnings of the danger of the public calls they launched to attract mercenaries and foreign fighters to their territory, the Ukrainian authorities insist on this move, turning a blind eye to the possibility of transforming the country into a hotbed for terrorists and murderers from various countries, including the US and Britain, from which dozens departed to fight under the umbrella of the so-called “International Legion,” according to what was revealed by Western media.

The scenario of attracting terrorists and recruiting mercenaries is repeated in Ukraine, similar to what took place in Syria, where Western countries recruited foreign terrorists from all parts of the world and provided them with various forms of support and facilitated their infiltration across the border with Turkey mainly to destabilize Syria’s security and stability and pave the way for acts of aggression and occupation under the pretext of fighting Daesh “ISIS” terrorist organization.

In a report yesterday, Reuters Agency talked about Americans who went to Ukraine to fight against Russian forces, including a college student from New York who works at JF Kennedy Airport and another from Connecticut state who has been fighting in Ukraine for three weeks.

In overt process of attracting mercenaries to Ukraine and inflaming the situation in it, an American company recently published an advertisement in which it searches for “professional fighters with field experience” in exchange for daily salaries ranging between one thousand and two thousand dollars.

The BBC, in turn, indicated in a recent report that more than a hundred persons from Scotland went to Ukraine with the aim of joining the so-called “International Legion”, which Ukrainian President Volodymyr Zelensky announced its formation late last month to fight against the Russian forces, in addition to dozens of other persons who had crossed Polish border to Ukrainian territory for the same purpose.

For its part, the British “The Times” newspaper revealed that the Kyiv authorities are recruiting “skilled mercenaries” to carry out operations inside the country in exchange for sums of up to two thousand dollars per day, while several media reports affirmed that thousands of fighters joined the aforementioned “Legion” and that there are private security companies that have experience in wars consist of volunteers and security contractors who arrived in Ukraine.

While high-quality lethal weapons are flowing into Ukraine and NATO countries are participating in sending more weapons and money to Kyiv, Western countries, led by the US, are mobilizing and sending hundreds of terrorist mercenaries to Ukraine to obstruct the Russian special military operation to protect the residents of Donbass in Ukraine, including terrorists who came from northern Syria.

Earlier, a Russian military source had confirmed that members of the Ukrainian Security Service and intelligence officers of the Turkish regime are working to recruit terrorists who are deployed in northern Syria to fight among the ranks of Ukrainian forces.