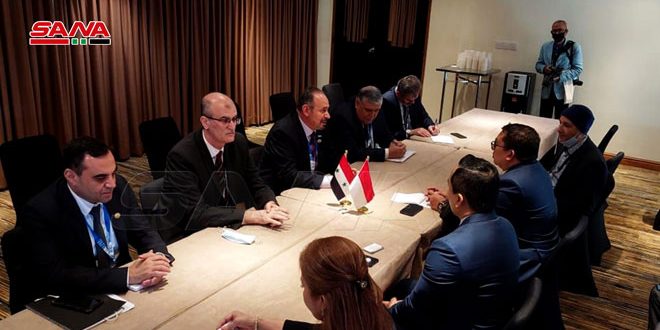 Jakarta, SANA- Syria and Indonesia stressed deepen historical relations between the two countries, which are being consolidated through distinguished parliamentary, economic and cultural relations.

During a meeting held on Tuesday between a Syrian People’s Assembly delegation headed by the Assembly’s Secretary Salloum al-Salloum and Chairman of the Inter-Parliamentary Cooperation Committee, the Indonesian House of Representatives, Dr. Fadli Zun, on the sidelines of Syria’s participation in the work of the 144th Assembly of the Inter-Parliamentary Union (IPU) and other relevant meetings. The delegation extended an official invitation to Dr. Zun to visit Syria, who promised to accept the invitation for further parliamentary talks.

In his intervention at the session of the General Assembly of the IPU devoted to discussing the emergency item on the agenda, al-Salloum expressed Syria’s full rejection to the Draft resolution presented by New Zealand with support of the western countries as it lacks balance because it hold responsibility for one party, and includes prejudices.

Participating in a workshop on imposing a global ban on nuclear testing, head of the Syrian delegation stressed Syria’s stance demanding of freeing the Middle East region from weapons of mass destruction, calling for putting pressures on Israeli occupation entity and the countries supporting it to abandon these weapons and stop its nuclear testing completely.

The delegation also participated in the meeting of the Standing Committee on International Peace and Security, on completing the discussion of the draft resolution on reconsidering the approach to peace processes. In the meeting of the Standing Committee on Democracy and Human Rights, Assembly member Omar Mahmoud al-Hamdo pointed out in his intervention that the Syrian Constitution has guaranteed the protection of human rights and public freedoms and ensures that citizens exercise them in accordance with the laws

Al-Hamdo indicated that the unjust terrorist war imposed on Syria for more than ten years and the unilateral coercive measures negatively affected the rights of the Syrian people, particularly their right to a decent life and obtaining the most basic necessities of life, such as food, medicine. Member of the Assembly Nidal al-Alou referred to, in a workshop on health security preparedness, the suffering of the Syrian people as a result of the terrorist war, unjust economic sanctions and the spread of the Coronavirus epidemic, which led to an acute shortage of medicine, calling upon the IPU to intervene with the World Health Organization to provide the necessary support to the health sector in Syria.