Putin to Lukashenko: Some positive developments in talks between Moscow and Kiev 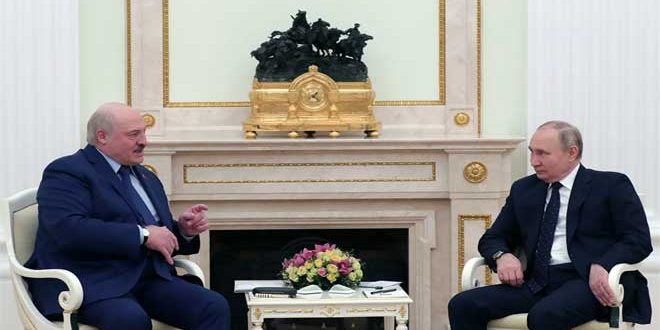 Moscow, SANA- There are some positive developments in the talks being conducted with Kiev to put an end to the fighting in Ukraine, Russian President, Vladimir Putin, said Friday at Kremlin in a meeting with his Belarussian counterpart, Alexander Lukashenko.

“Regarding the talks held almost on a daily basis between Russia and Ukraine, delegates from our side reported that they touched some positive changes,” Russia Today quoted President Putin as saying.

President Putin reiterated that his country “doesn’t want to occupy Ukraine, clarifying that Russia’s target is to protect people who have being subjected to mass genocide and persecution practiced by the regime in Kiev”.

He underlined that the unprecedented sanctions imposed on Russia give it opportunities to enhance the technological and economic sovereignty.

President Putin affirmed that Russia will overcome all problems caused by the sanctions, saying: “We will gain more competences and opportunities for more economic independence which will be at the end as beneficial to us as it was in the past years”.