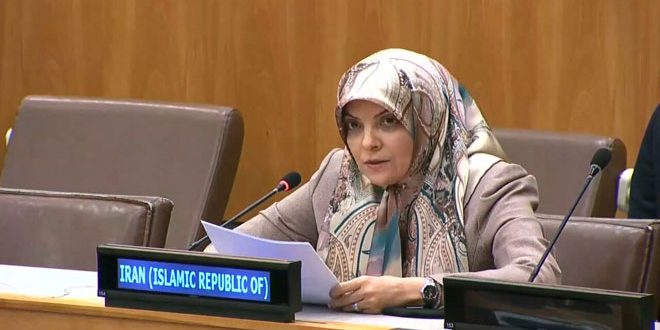 New-York, SANA- Iran has warned again that some Western states continue to exploit the Organization for the Prohibition of Chemical Weapons (OPCW) to achieve their political goals.

Syria has fulfilled all its obligations towards the Chemical Weapons Convention (CWC), at a time when the United States and the Zionist entity are still the main obstacle to the complete  elimination of these weapons, Deputy Permanent Representative of Iran to the UN Zahra Ershadi said during a meeting of the UN Security Council held Wednesday.

“There is no justification for holding monthly meetings by the Security Council to discuss the so-called Syrian chemical file, as the Syrian government has implemented its obligations under the Chemical Weapons Convention and that was confirmed before by the organization,” Ershadi added.

She stressed that such meetings, weaken the Convention’s credibility instead of supporting its goals and they further deepen the Security Council credibility crisis, renewing her country’s stance on the use of chemical weapons by any party, anywhere and under any circumstances.

Ershadi added the absolute guarantee that the chemical weapons will not be used again is their elimination from all parts of the world, and this is the basic goal of the Chemical Weapons Convention and this can be achieved only through its full, balanced, effective and non-discriminatory implementation by all countries of the world, on top the United States.

She renewed the demand that the Security Council compel the Israeli occupation entity to join the Chemical Weapons Convention without any precondition or further delay.