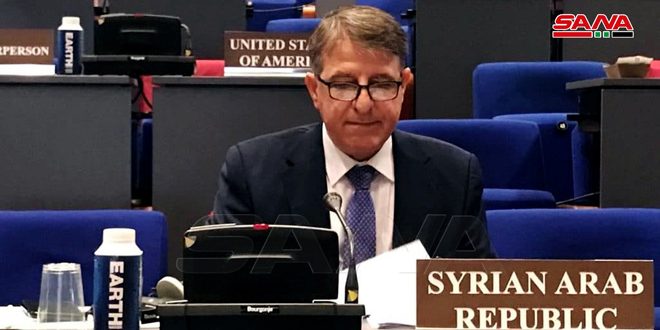 The Hague, SANA- Syria’s Permanent Representative to the Organization for the Prohibition of Chemical Weapons (OPCW), Ambassador Milad Attiya said that Syria has faced a historically unprecedented campaign of false accusations of not cooperating with the organization.

“What Syria has been exposed to over the past years within the organization raised a serious question about the organization’s ability to carry out its mandate under the Convention and its ability to stand against the US pressures and its Western allies,” Attiya said in Syria’s statement during the opening session of the 26th session of the Conference of States Parties of the Chemical Weapons Convention in the Hague on Monday.

“Achieving universality of the Chemical Weapons Convention represents a very important step to ensure the establishment of an effective global system against chemical weapons, but this will not happen unless obligating Israel to join the Chemical Weapons Convention and other international agreements related to the non-proliferation of weapons of mass destruction”, he added.

The Syrian Arab Republic regrets that the sponsoring countries of the Non-Proliferation Treaty of Nuclear Weapons will hamper any effort to establish a zone free of weapons of mass destruction in the Middle East, simply to protect Israel and to keep this State out of all international control over its nuclear, chemical and biological facilities.

He indicated that Syria joined the Chemical Weapons Convention in 2013 voluntarily and in good faith, based on rejecting the use of chemical weapons by anyone, anywhere and under any circumstances, and reiterated that Syria faithfully implemented credibly his sovereign decision to terminate the Syrian chemical file in record time despite the very difficult and complicated circumstances that it has gone through.

chemical weapons Milad Attiya Organization for the Prohibition of Chemical Weapons 2021-11-30
rafah
Share
Previous Syria reaffirms its principled, firm stance in support of Palestinian people
Next After scandal of its concealment truth, US Army opens investigation into al-Baghouz massacre