Damascus, SANA- Syria reaffirmed its principled and firm stance in support of the right of the Palestinian people to self-determination and the establishment of their independent state on all their national soil with Jerusalem as its capital according to General Assembly Resolution No.194 for 1948 as an imprescriptible and inalienable right based on international law, United Nations resolutions and all relevant international charters.

“This day has become a solid global platform that keeps the Palestinian cause alive , particularly with the continued dangers that still pose threat to the Palestinian cause,” Mikdad said in the message, adding that no progress has been made until today by the international community to put an end to the Israeli occupation of the Arab lands.

He stressed Syria’s firm stance in rejecting and condemning the Israeli occupation of Arab lands, the war crimes and crimes against humanity committed by Israel, the occupying power in the Palestinian territories, and Syria’s rejection of any decisions or measures that do not comply with the UN relevant resolutions.

firm stance in support of Palestinian people Syria reaffirms its principled 2021-11-29
bushra
Share
Previous Mikdad: Syria has given lessons in repelling projects that targeted its stability
Next Ambassador Attiya: OPCW has turned into a tool of political manipulation by Washington and its allies 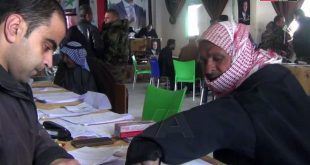