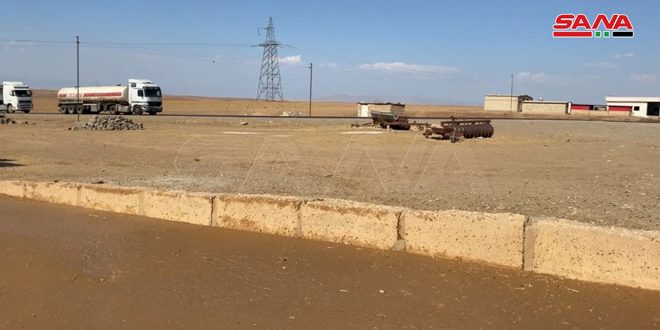 Hasaka, SANA- A convoy of US occupation vehicles laden with stolen Syrian oil have left the Syrian territory heading for northern Iraq through the illegitimate al-Walid crossing in al-Ya’arubyia countryside, in the far northeast of Hasaka City.

“Over the past hours, a convoy of 33 US occupation’s vehicles including tankers laden with stolen oil from the Syrian al-Jazeera region headed for the Iraqi territory through al-Walid illegitimate crossing,” local sources from al-Ya’arubyia told SANA reporter.

The sources added that SUV vehicles belonging to QSD militia that are equipped with various types of machine guns accompanied the convoy as more than 100 vehicles have left the Syrian territory heading for Iraq.

In another context, local sources in al-Ya’arubyia stated that a convoy of more than 50 of the US occupation vehicles that included refrigeration tankers and a number of tankers for transporting oil have entered and they headed for Rmelan town in the northeastern countryside and from there they headed for Tal Hamis and they reached Tal Baider area on al-Dirbasyia- Hasaka highway.

On Sunday, a convoy of 79 US occupation’s military vehicles, mostly armored vehicles, left the Syrian territory heading for Iraq as they had come from Khrab al-Jeer Airport in al-Ya’arubyia countryside, which is taken by the US occupation as a bases for its forces in the region, and they headed towards the Iraqi territory through al-Walid illegitimate crossing.