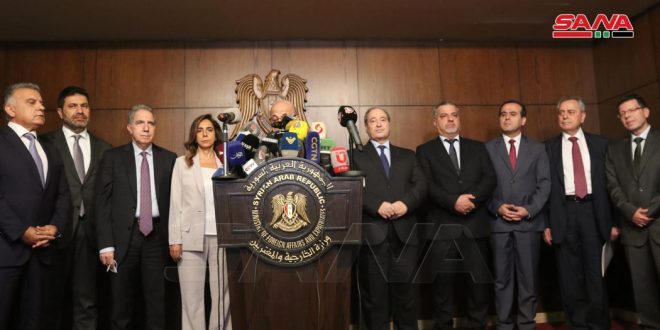 Damascus, SANA – Syrian –Lebanese talks session was held in Damascus on Saturday, headed by Foreign and Expatriates Minister, Fayssal Mikdad on behalf of the Syrian side, and Deputy Prime Minister, Minister of Defense and Acting Minister of Foreign Affairs and Emigrants in the Lebanese caretaker government, Zeina Akar.

Following the talks, head of the Lebanese-Syrian Higher Council, Nasri Khoury told journalists in a statement that Syria agreed Lebanon’s request to help in transmitting gas from Egypt and electricity from Jordan via Syrian territories, and expressed its readiness to meet this request. “We discussed the difficult situations which the two countries are going through , particularly in electricity and gas fields, as the Lebanese side requested the possibility of Syria’s assistance to Lebanon in transporting Egyptian gas and Jordanian electricity via the Syrian territories, and the Syrian side welcomed the request.” Khoury said.

He added that the two sides agreed also on following up the detailed technical procedures through a joint team to discuss issues related to the technical cases in the two countries.