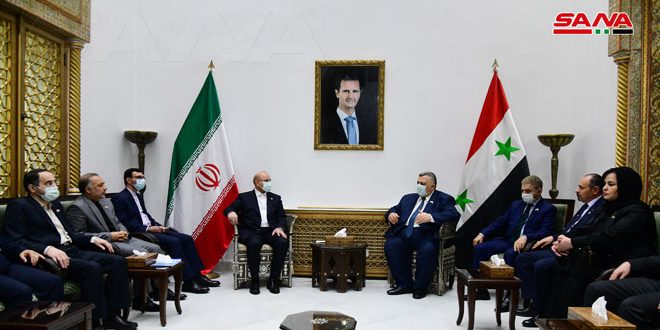 Damascus, SANA- Speaker of the People’s Assembly, Hammouda Sabbagh, stressed the importance of deepening talks and exchanging points of view, visions and opinions between Syria and Iran on various parliamentary, economic and cultural levels in the interest of the two friendly countries and peoples. Sabbagh, during a meeting with Speaker of the Islamic Shura Council of Iran, Mohammad Bagher Ghalibaf, called for increasing parliamentary cooperation between the Syrian People’s Assembly and the Islamic Shura Council in Iran through the two joint friendship committees, stressing that the Syrian-Iranian relations are getting stronger day by day, and there is permanent high-level coordination between the two countries during their participation at international, regional and local conferences, seminars and workshops.

Sabbagh pointed out that the exchange of delegations and visits between the two countries is part of the bilateral efforts exerted to strengthen cooperation in all fields, support the development process and increase the rates of joint trade exchange.

For his part, Ghalibaf affirmed that the historic and deeply-rooted relations between the two friendly peoples in Iran and Syria contributed to the consolidation of cooperation in all aspects and fields, and they are getting stronger, stressing the important role of countries of the axis of resistance in confronting the crimes committed by the Americans and Zionists against the peoples of the region and the world.

Ghalibaf pointed out that the victory that Syria achieved through the wide popular participation in the presidential election after nearly a decade of the terrorist war that was imposed on Syria also represents a victory for the axis of resistance.
He called for promoting economic relations and trade exchange to the level of distinguished political relations between the two friendly countries, referring to the need for preparing the ground to strengthen economic relations and expand the scope of joint cooperation in all fields.

Later, the two sides held a press conference during which Sabbagh affirmed that the two friendly countries and peoples in Syria and Iran are bound by one destiny and track, and they are engaged in a battle of resistance to achieve the values ​​of truth, justice and equality and to eliminate all forms of hegemony that the US and Zionism are trying to impose on the peoples of the region.

For his part, Ghalibaf congratulated the leadership, government and people of Syria on the return of security and stability to most of its lands and the victories it achieved in the face of terrorism, pointing out that the Zionists and the Americans moved, after the failure of their plots, to wage economic wars and put pressure on the Iranian and Syrian peoples, so  priority now should be for achieving joint development and developing economic  relations between the two friendly countries.

2021-07-28
bushra
Share
Previous A stand in Hasaka in protest against Turkish occupation crime of cutting off drinking water
Next A civilian martyred, others wounded in explosion of mine left by terrorists in Idleb countryside