Amounts of weapons and ammunition, including Israeli-made, and a drone, found in Southern region 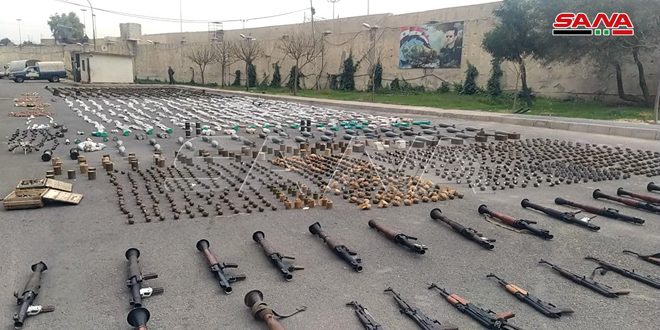 Damascus, SANA- The competent authorities on Sunday found amounts of weapons and ammunition, among them Israeli-made, and a drone, left behind by terrorists in southern region, SANA reporter said.

A competent authorities source told SANA reporter that the competent authorities, in cooperation with Syrian Arab Army units in the southern region, have found amount of medium, heavy and light weapons left behind by terrorist groups, some of them are Israeli-made, in addition to a drone.

The source indicated that the Army units, in cooperation with the components authorities continue searching the villages and towns in all areas that have been cleared from the terrorist.

The army units during combing operations of the liberated areas have found dozens of tunnels, weapons and ammunition whorehouses, most of them were US and Israeli made, in addition to large amounts of logistic equipment and headquarters which were used to attack the safe areas and the army’s checkpoints.