Syria renews call for ending Israeli occupation of the Syrian Golan, condemns continuation of settlement in it 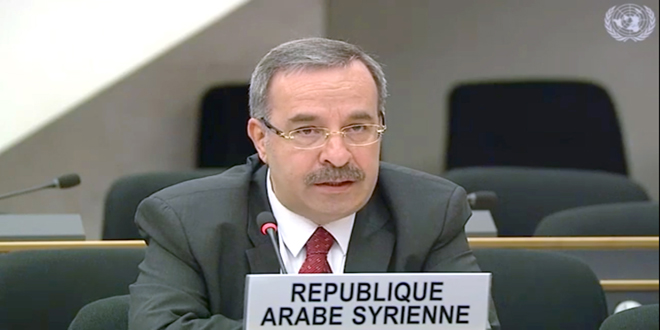 Geneva, SANA- Syria’s Permanent Representative to the UN and other international organizations in Geneva, Ambassador Hussam Eddin Ala reiterated Syria’s demand for ending the Israeli occupation of the Syrian Arab Golan.

“In spite of the repeated resolutions issued by the Human Rights’ Council and UN bodies which call for ending the Israeli occupation of the Syrian Golan, the Israeli entity continues its illegitimate procedures to impose its laws and administration on the occupied Syrian Golan in a flagrant violation of the UN Security Council resolutions, including resolution no.497 for 1981,” Ambassador Ala said in a statement to the 45th session of the Human Rights Council “ Item 7 on the state of the human rights in Palestine and other occupied Arab lands.”

The occupation authorities continue their suppressive practices against the Syrian citizens in the occupied Golan and impose restrictions and arbitrary measures which violate their basic rights, including their right to work, health, education, possession and freedom of movement, as well as they continue to loot the natural resources of the occupied Syrian Golan, the ambassador indicated.

“The occupying forces continue to tighten noose against the Golanese people in an attempt to seize their agriculture lands and to confiscate them and establish an agricultural situation to serve the Israeli settlers, in addition to restricting the Syrian citizens’ movement and preventing them from building on their lands in the framework of the Israeli schemes to establish a demographic change in the occupied Syrian Golan” Ala added.

Syria stresses the importance of the Item 7 on monitoring the Israeli violations of the human rights in the occupied Palestinian territories, including the Eastern Jerusalem and the occupied Syrian Golan and its role in putting pressures on the occupying authority to oblige it to stop committing violations and illegal practices and to end its occupation” , Ala added, holding the states supporting Israel responsible for the continuation of those crimes.

“Syria condemns the continued expansion of Israeli settlements in the Syrian Golan and the occupied Palestinian territories, including Eastern Jerusalem, and calls for complete cessation of all forms of settlement and other activities aimed at making demographic change and converting the legal situation of the occupied lands in a blatant violation of the UN Security Council relevant resolutions and  the Fourth Geneva Convention ,” he said.

Ala reiterated that Syria also condemns the Israeli entity’s crimes and violations of the human rights, the international law and humanitarian law in the occupied Palestinian lands, including Eastern Jerusalem, and calls for stopping the barbaric practices committed by the occupation forces  against the Palestinians.

Ala concluded his speech by stressing Syria’s support for the Palestinian people’s right in establishing their independent state, on the borders of June 4, 1967, with Jerusalem as its capital, and guaranteeing the return of Palestinian refugees based on the UN relevant resolutions and ending the Israeli occupation of the occupied Lebanese lands, asserting that the extraordinary circumstances Syria is witnessing do not change the fact that the Golan will remain a Syrian land, and that Syria’s right in its occupied Golan is guaranteed by international law and UN resolutions, particularly the resolution 497 of 1981 . 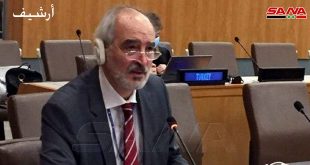 Al-Jaafari: Golan is a Syrian territory that we struggle to restore completely