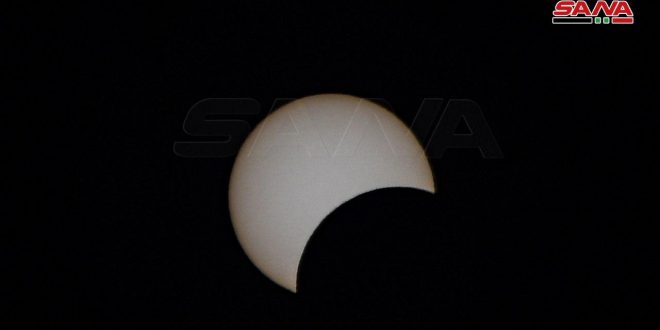 Damascus, SANA-Syria and the Arab region witnessed this morning a partial solar eclipse.

In a statement to SANA last Wednesday, Head of the Syrian Astronomical Society, Dr. Mohammad al-Asiri  said that the earth on June 21st / Sunday/ will witness a partial solar eclipse in some regions and an annular eclipse in the areas which are located along the eclipse track.

Al-Asiri added that the solar eclipse will last for about 5 hours and 48 minutes, indicating that the partial solar eclipse will be in Syria and the Arab region with about 34 % and it will last for two hours and 4 minutes approximately as it will begin at 7:29 a.m.  (Damascus time) and it will reach the climax exactly at 08:27 a.m. and end at 09:33 a.m.