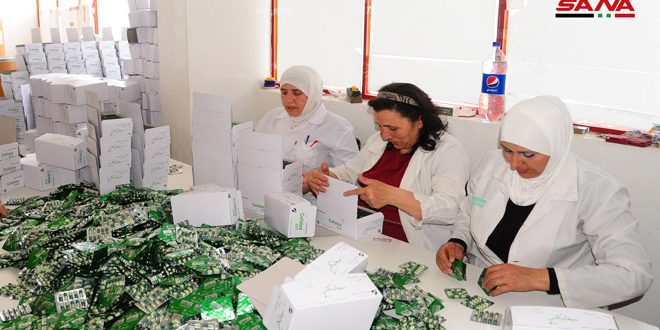 Damascus, SANA- A medication shipment produced by the Arab Medical Company (Tamiko) was launched from Damascus this morning, heading for Deir Ezzor province to support the pharmaceutical sector in the province.

In a statement to SANA, Tamiko Director-General Dr. Fidaa Ali said that this is the second shipment prepared and sent by the company after sending another shipment of medicines to Aleppo Province which included 11 tons of various medicines.

Dr. Ali noted that the new shipment includes 10 tons of various types of medicines produced by the company such as antipyretics, anti-inflammatory and diabetic medications as well as the hand sanitizers which the company has recently produced.

He added that the shipment whose value is estimated at about SYP 100 million will be received by the branch of the Pharmacists Syndicate in Deir Ezzor in coordination with the Health Ministry as they medicines will be distributed among the pharmacies in the province.

Dr. Ali affirmed that Tamiko Company will continue to provide other provinces with shipments of medicines respectively.

Damascus, SANA- People’s Assembly has approved a draft law including a raise of the rate …