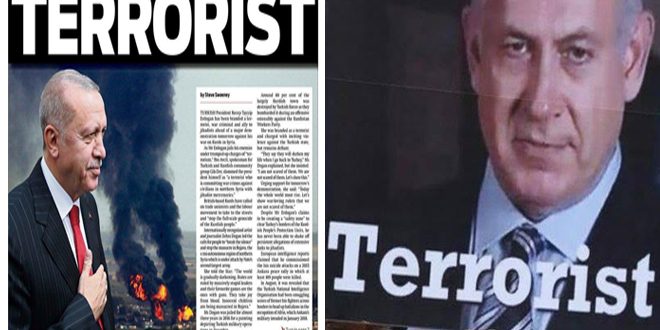 Damascus, SANA- The farcical play acted by President of the Turkish regime Recep Tayyip Erdogan on the state of hostility with the entity of the Israeli occupation and his claims to defend the interests of the Palestinian people, have become exposed for the public opinion through the increase in the intra-regional trade and strategic relations with the occupation entity, which Prime Minister Benjamin Netanyahu has described recently as deep-rooted, despite the media bubble on the hostility between them.

Erdogan’s regime has recently tried to cover up the issue of the arrival of a cargo plane belonging to the Israeli occupation entity in Istanbul last Sunday as it said that the plane was carrying medical aid to confront the Coronavirus and it asked its media not to talk about the matter, but that the website of “Israel in Turkish” which is affiliated to the occupation’s government revealed that the new cargo plane will help trade between the two sides reach record levels through mutual flights.

Ahead of the arrival of the aforementioned cargo plane, Erdogan’s regime sent a cargo plane to “Israel”, which it claimed was sent for the Palestinians in the context of fighting the Coronavirus pandemic, yet the website of “Times of Israel” last month revealed that the that the deal was “purely commercial” and had nothing to do with helping the Palestinians, and that was confirmed by the Israeli newspaper Yedioth Ahronoth as well.

The Coronavirus pandemic, which has raged across the world, has exposed the falseness of the state of enmity between the Turkish regime and the entity of the Israeli occupation, and clearly exposed the chapters of this regime’s lies and its comic plays in which it claims to defend the Palestinian cause with rhetoric and deceptive slogans and showed that it trades*1 in the Palestinians’ rights and implement the outdated Ottoman schemes in the region at a time when news reports indicate that Turkish-Israeli relations have continued without interruption despite the fake differences during the Israeli aggression on the Gaza Strip in 2008.

Turkey’s relations with the occupation entity that began in 1949 have multiplied dozens of times, with the government of the Justice and Development Party led by Erdogan assuming power in Turkey in 2002 as the party has worked on enhancing previous agreements with the occupation entity not caring about the contradiction in its approach which shows its enthusiasm for the Palestinian cause in a time when it secretly enhances trade and military relations with the Zionist entity.

Despite all the money the Turkish system spends on media to create a fake idea that it supports the Palestinian cause and the Palestinians more than others, the reports issued by the United Nations Relief and Works Agency for Palestine Refugees (UNRWA) drop all masks and expose those who exploit the Palestinians and their cause as the name of Turkey does not appear among the donor countries.

Media websites, including the Turkish “Ahwal” website have published economic reports that exposed in figures what Erdogan is trying to cover up through his media bubbles of the increasing volume of trade between his regime and the occupation entity, as these reports indicate that the volume of trade exchange between Turkey and the occupation entity developed during more than a decade where in 2002 it amounted to USD 1.39 billion, and in 2014 it increased to USD 5.83 billion, as trade exchange between the two sides in 2016 reached up to more than USD 4.2 billion, to increase by 14 percent in 2017, while the occupation entity is one of the five most important markets in which the Turkish regime markets its goods.

Erdogan’s cooperation with the Israeli occupation was not limited to previous agreements to transfer the relationship with “Israel” to the “strategic” stage. Even his play of his withdrawal from the Davos Forum Summit in 2009, did not affect the military agreements between the two sides that make “Israel” the first supplier of weapons to Turkey.

Perhaps what Netanyahu revealed last February during his meeting with the leaders of the Likud party on the lies of Erdogan who claimed that Ankara cut ties with the Israeli entity, saying: “I think that I am the only Israeli who does not yet travel to Turkey … Erdogan used to call me Hitler every 3 hours … but trade between us is refreshing.” And that was like a snowball that rolled over to expose Erdogan’s farce about the illusion of hostility with the occupation entity.