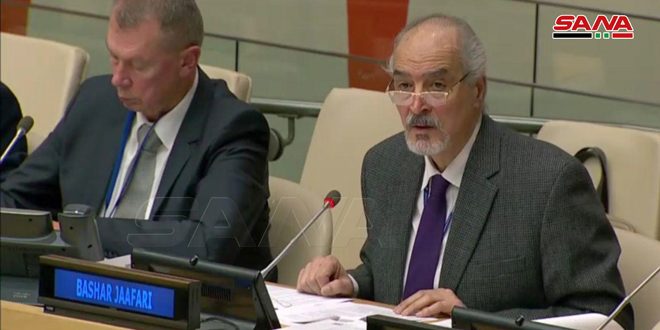 New York, SANA_ Syria’s Permanent Representative to the United Nations, Dr. Bashar Al-Jaafari, reiterated Syria’s rejection of any future conclusions of the Fact-Finding Mission of the Organization for the Prohibition of Chemical Weapons (OPCW) about the alleged use of chemical substances in Douma on April 7, 2018.

Al-Jaafari speech came during a meeting in New York on Tuesday about allegations of using the chemical weapon in Douma.

“ Some countries are trying to repeat what happened in Iraq and find pretexts with the aim of launching an aggression against Syria, but we will not allow that,” he said.

Al-Jaafari stressed that since the fact-finding mission was established, it has not fulfilled its mandate in accordance with the provisions of the OPCW.

The mission, according to al-Jaafari, conducts its investigations from afar, depends on what it calls open sources, touches upon serious political issues and falsifies the facts in violation of the mandate given to it.

He said that all the leaked information, especially the important report of the expert in the OPCW Ian Henderson, one of the members of the mission, contradicts the report issued by the head of the Office of the Director-General of the organization.

“Henderson recognized that the results of the report of the organization are not compatible with reality and contradict with engineering studies. He cast further doubts on the credibility of the final report and clearly showed the validity of the opinions expressed by several delegations in the OPCW,” al-Jaafari clarified.

According to the Syrian Diplomat, the importance of Henderson’s report is based on a fundamental point that the two supposed chlorine cylinders that were found in two places in Douma were placed manually and this unequivocally demonstrates that the alleged incident of using chlorine weapon in Douma it was fabricated.

Al-Jaafari indicated that the fact-finding mission visited the site of the alleged incident, but the mission was prevented from participating in preparing the Douma report issued by the OPCW fact-finding.

He reiterated that the countries that launched a military aggression against Syria on April 14, 2018, taking advantage of the alleged Douma incident as an excuse, are the same countries that defended the OPCW report even before this organization investigated the alleged incident.

“Some countries are trying to repeat what happened in Iraq in Syria using allegations and fabricated lies related to weapons of mass destruction to find a pretext for aggression,” al-Jaafari said.

He added that the United States that invaded Iraq worked before to falsify documents issued by various missions and committees to justify the invasion, ignoring that these missions confirmed the absence of any weapon of mass destruction in Iraq.

Al-Jaafari stressed that “Syria will not allow that to happen”, calling on the member states that believe in international law and the Charter of the United Nations to raise their voice against these attempts.

He concluded that the difference between the two cases is that, in the case of Iraq, there were two mechanisms sufficient to destroy Iraq, but the sponsoring states of terrorism in Syria pushed towards the formation of six international mechanisms that were not neutral, independent, impartial or objective and whose objective was to fabricate accusations against Syria to justify the attacks against it in the service of the agendas and interests of some countries.