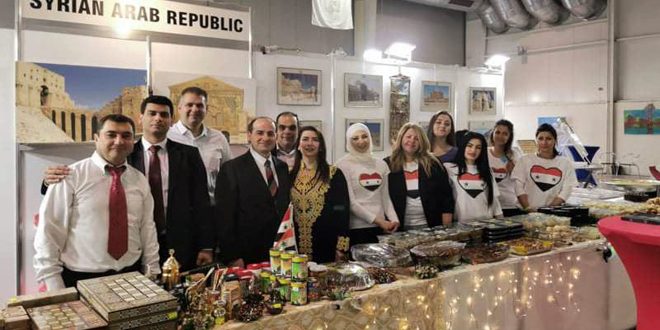 Sofia, SANA-Embassy of the Syrian Arab Republic participated in the 25th edition of the charitable diplomat bazaar, which was organized by the International Women’s Club of Sofia, with the participation of a number of embassies accredited in Bulgaria, and organizations and bodies that concerned with the social affairs and charity and humanitarian works.

The Syrian pavilion in the bazaar has witnessed large and remarkable turnout where it displayed a variety of Syrian-made furniture, folk clothing, textiles, embroidery and mosaic pieces, and Arabic calligraphy paintings which showed the civilized and historical features of Syria, in addition to the Syrian most famous food and sweets.

A number of historical films on Syria’s deep-rooted history and the most significant archeological sites and destinations were screened in the Bulgarian, Arabic, Deutsch, and English languages.

Need to develop brotherly relations between Syria and Oman underlined