Al-Jaafari: Liberating Idleb will be the last nail in the coffin of terrorism 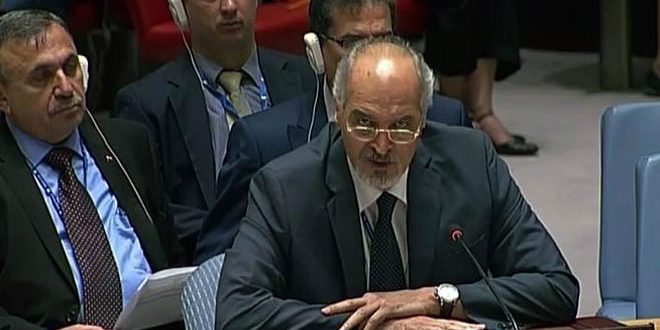 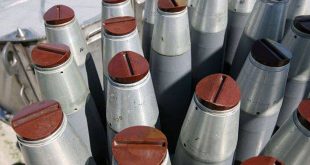 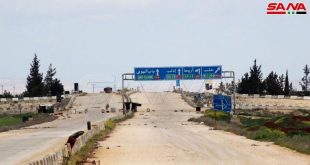 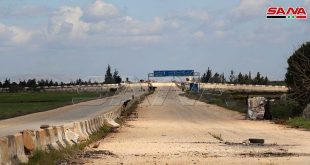 New York, SANA – Syria’s Permanent Representative at the UN Bashar al-Jaafari said that Syria is determined to combat terrorism and liberate all Syrian territory from terrorists and foreign occupation in all its forms.

During a Security Council session on Friday, al-Jaafari said that any action taken by the Syrian government to expel terrorists from Idleb is a sovereign right guaranteed by international law, the UN Charter, and Security Council resolutions on counter-terrorism.

He said that this action answers the demand of millions of Syrians, including the people of Idleb who are besieged by terrorists.

Al-Jaafari said that no state or any other side has the right to undermine this right, nor do they have the right to engage in political and media exploitation of the suffering of people if Idleb to dissuade the Syrian government from restoring security, stability, and normal life to this province.

He said that certain sides’ defense of terrorists in Idleb is a desperate bid to protect these terrorists and “extend their expiration date” so that they can transport them and present them as “very moderate opposition” in other countries.

Al-Jaafari said that no-one cares more than Syria about the wellbeing of its people, which is why it declared its commitment to favoring reconciliation and gave enough time for armed groups in Idleb to lay down their weapons, join the reconciliation process, and distance themselves from terror organizations.

“Those who facilitated the entry of foreign terrorists into Syria, including the Turkish government, can still withdraw them from Idleb, just like they did with their White Helmets members whom they had smuggled in cooperation with Israel before shipping them to Idleb to prepare for another terrorist crime using chemical weapons,” he said.

Syria’s representative said that if terrorists refuse to lay down their weapons and leave Syria to wherever they came from, the Syrian government has taken all the steps needed to protect civilians and evacuate them via safe corridors similar to what happened in other area, as Syria is aware of the humanitarian responsibilities that may result from the liberation of Idleb from Jabhat al-Nsura and other terror groups affiliated to it.

Al-Jaafari said that the Security Council’s presidency is now appointing itself as both opponent and judge, imposing the discussion of the situation in Nicaragua one day ago, and today imposing the discussion of the situation in Idleb, and tomorrow it will be Venezuela’s turn then Iran, stressing that the US, Britain, and France exploit their periodical presidency of the Council to rally hostility against Syria and to pile on threats whenever the Syrian Arab Army and its allies make progress against these three states’ terrorist pawns.

He said that the governments of the US, Britain, and France and their pawns in the region are the direct cause of Syrians’ suffering because they keep escalating the crisis and they seek to prolong it by exploiting the Takfiri terrorism they created in the 1980s to use against states that reject their dictations.

“In light of the information provided to the Security Council about the preparations made by terrorists and White Helmets members to use chemical weapons and lay the blame on the Syrian government to provoke a new partitive aggression against it, Syria reiterates its demand that the three countries who have influence over terrorist organizations must use that influence to prevent them from using any chemical weapons or materials that could be used as an excuse to elicit direct intervention and aggression by their supporters against Syria,” he said.

Al-Jaafari asserted that the attempts to invest in terrorism in Syria have failed, adding “the liberation of Idleb from Jabhat al-Nusra and groups affiliated to it will be the last nail in the coffin of terrorism, frustrating those who bet on it and invested billions of dollars in it, those whose yelling fills the halls of this organization much like what happened when the Syrian Army was about to liberate the eastern neighborhoods of Aleppo city, the eastern Ghouta, and Daraa and its countryside.”