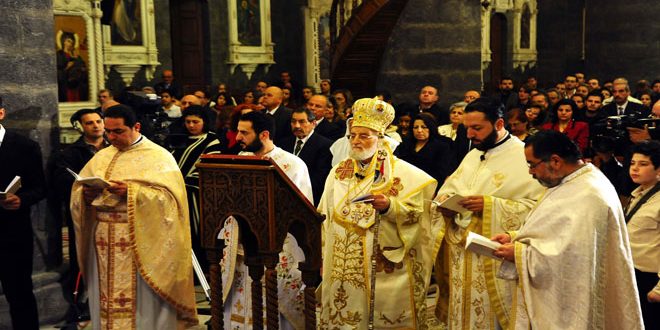 Damascus, SANA – Christian denominations in Syria on Sunday celebrated Easter by holding prayers and masses in churches and places of worship.

In the Lady of Dormition Cathedral in Damascus, Melkite Greek Catholic Patriarch of Antioch and All East Gregory III Laham presided upon the Easter celebrations, delivering a sermon emphasizing the meaning of Easter and calling for unity, solidarity and love among Syrians, in addition to condemning the recent terrorist bombing that targeted the people of Kefraya and al-Foua’a. A similar ceremony was also held at the St. George Cathedral, presided upon by Syriac Orthodox Patriarch of Antioch and All East Mar Ignatius Aphram II, who said in his sermon hope that terrorism and injustice are bound to be defeated by the light of righteousness.

Armenian Orthodox Bishop of Damascus Armash Nalbandian also presided upon a mass at the Mar Serkis Church in Damascus, in which he delivered a sermon denouncing all forms of terrorism and aggression targeting Syria, while during the mass held at the Evangelical Church of Damascus, its Pastor Rev. Boutros Zaour said that Easter bears a message of rising above evil and injustice, and that Syria has been an example of coexistence, faith, and peace since the dawn of history. Meanwhile in Aleppo, celebrations were limited to prayers and masses at churches in honor of the victims of the bombing that targeted the buses transporting the people of Kefraya and al-Foua’a.

Easter celebrations were held in churches across Syrian provinces, including the Lady of Annunciation Church in Daraa city, Mar Elias Church in Ezra’a, St. George Cathedral in Hasaka, the Archdiocese of Bosra, Horan, and Jabal al-Arab, in Jesus the King Church, and in the Good Shepherd Church in Sweida.